Here’s What Hedge Funds Think About The Middleby Corporation (MIDD)

Insider Monkey has processed numerous 13F filings of hedge funds and successful investors to create an extensive database of hedge fund holdings. The 13F filings show the hedge funds’ and successful investors’ positions as of the end of the first quarter. You can find write-ups about an individual hedge fund’s trades on numerous financial news websites. However, in this article we will take a look at their collective moves and analyze what the smart money thinks of The Middleby Corporation (NASDAQ:MIDD) based on that data.

The Middleby Corporation (NASDAQ:MIDD) investors should be aware of an increase in hedge fund interest recently. MIDD was in 20 hedge funds’ portfolios at the end of March. There were 17 hedge funds in our database with MIDD positions at the end of the previous quarter. Our calculations also showed that MIDD isn’t among the 30 most popular stocks among hedge funds.

What does the smart money think about The Middleby Corporation (NASDAQ:MIDD)? 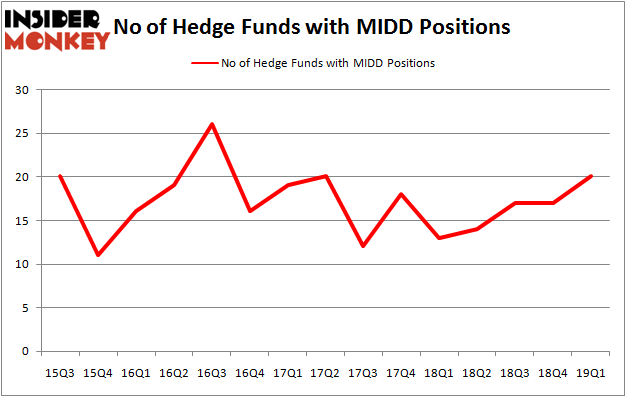 Consequently, key money managers were leading the bulls’ herd. Columbus Circle Investors, managed by Principal Global Investors, established the most outsized position in The Middleby Corporation (NASDAQ:MIDD). Columbus Circle Investors had $37.8 million invested in the company at the end of the quarter. Mark Kingdon’s Kingdon Capital also made a $34.1 million investment in the stock during the quarter. The other funds with new positions in the stock are Ricky Sandler’s Eminence Capital, Elise Di Vincenzo Crumbine’s Stormborn Capital Management, and Ira Unschuld’s Brant Point Investment Management.

As you can see these stocks had an average of 23 hedge funds with bullish positions and the average amount invested in these stocks was $466 million. That figure was $656 million in MIDD’s case. Ceridian HCM Holding Inc. (NYSE:CDAY) is the most popular stock in this table. On the other hand Companhia de Saneamento Básico do Estado de São Paulo – SABESP (NYSE:SBS) is the least popular one with only 16 bullish hedge fund positions. The Middleby Corporation (NASDAQ:MIDD) is not the least popular stock in this group but hedge fund interest is still below average. Our calculations showed that top 20 most popular stocks among hedge funds returned 1.9% in Q2 through May 30th and outperformed the S&P 500 ETF (SPY) by more than 3 percentage points. A small number of hedge funds were also right about betting on MIDD as the stock returned 2.5% during the same time frame and outperformed the market by an even larger margin.