Hedge Funds and other institutional investors have just completed filing their 13Fs with the Securities and Exchange Commission, revealing their equity portfolios as of the end of December. At Insider Monkey, we follow nearly 750 active hedge funds and notable investors and by analyzing their 13F filings, we can determine the stocks that they are collectively bullish on. One of their picks is The Madison Square Garden Company (NYSE:MSG), so let’s take a closer look at the sentiment that surrounds it in the current quarter.

Is The Madison Square Garden Company (NYSE:MSG) an outstanding investment right now? Hedge funds are buying. The number of long hedge fund bets advanced by 6 lately. Our calculations also showed that MSG isn’t among the 30 most popular stocks among hedge funds.

How have hedgies been trading The Madison Square Garden Company (NYSE:MSG)?

Heading into the first quarter of 2019, a total of 46 of the hedge funds tracked by Insider Monkey were long this stock, a change of 15% from the second quarter of 2018. The graph below displays the number of hedge funds with bullish position in MSG over the last 14 quarters. With the smart money’s sentiment swirling, there exists an “upper tier” of key hedge fund managers who were increasing their stakes substantially (or already accumulated large positions). 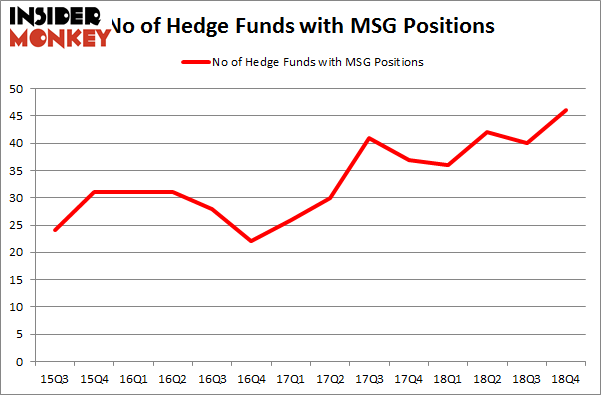 According to publicly available hedge fund and institutional investor holdings data compiled by Insider Monkey, Jim Davidson, Dave Roux and Glenn Hutchins’s Silver Lake Partners has the number one position in The Madison Square Garden Company (NYSE:MSG), worth close to $499.5 million, accounting for 12.2% of its total 13F portfolio. Coming in second is Mario Gabelli of GAMCO Investors, with a $212.7 million position; 1.8% of its 13F portfolio is allocated to the company. Some other peers that hold long positions include Clifton S. Robbins’s Blue Harbour Group, Ken Griffin’s Citadel Investment Group and Robert Pohly’s Samlyn Capital.

As you can see these stocks had an average of 21 hedge funds with bullish positions and the average amount invested in these stocks was $425 million. That figure was $1734 million in MSG’s case. East West Bancorp, Inc. (NASDAQ:EWBC) is the most popular stock in this table. On the other hand Kilroy Realty Corp (NYSE:KRC) is the least popular one with only 13 bullish hedge fund positions. Compared to these stocks The Madison Square Garden Company (NYSE:MSG) is more popular among hedge funds. Considering that hedge funds are fond of this stock in relation to its market cap peers, it may be a good idea to analyze it in detail and potentially include it in your portfolio. Our calculations showed that top 15 most popular stocks among hedge funds returned 21.3% through April 8th and outperformed the S&P 500 ETF (SPY) by more than 5 percentage points. Unfortunately MSG wasn’t in this group. Hedge funds that bet on MSG were disappointed as the stock returned 10.9% and underperformed the market. If you are interested in investing in large cap stocks, you should check out the top 15 hedge fund stocks as 12 of these outperformed the market.