Is The Howard Hughes Corporation (NYSE:HHC) a good investment right now? We check hedge fund and billionaire investor sentiment before delving into hours of research. Hedge funds spend millions of dollars on Ivy League graduates, expert networks, and get tips from investment bankers and industry insiders. Sure they sometimes fail miserably but historically their consensus stock picks outperformed the market after adjusting for known risk factors.

The Howard Hughes Corporation (NYSE:HHC) investors should be aware of an increase in hedge fund interest in recent months. HHC was in 26 hedge funds’ portfolios at the end of the fourth quarter of 2018. There were 19 hedge funds in our database with HHC positions at the end of the previous quarter. Our calculations also showed that HHC isn’t among the 30 most popular stocks among hedge funds.

At Q4’s end, a total of 26 of the hedge funds tracked by Insider Monkey were long this stock, a change of 37% from the previous quarter. Below, you can check out the change in hedge fund sentiment towards HHC over the last 14 quarters. With the smart money’s capital changing hands, there exists a select group of noteworthy hedge fund managers who were increasing their stakes considerably (or already accumulated large positions). 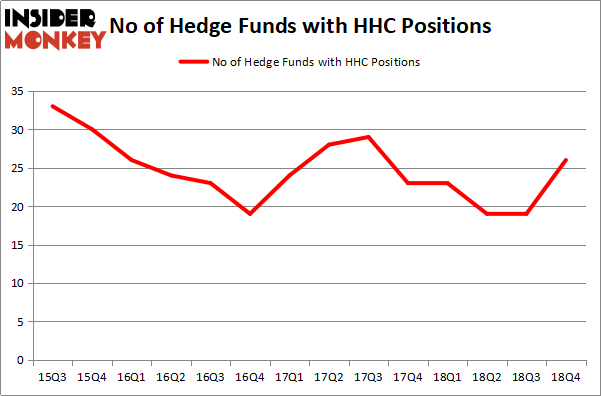 More specifically, Horizon Asset Management was the largest shareholder of The Howard Hughes Corporation (NYSE:HHC), with a stake worth $184.1 million reported as of the end of September. Trailing Horizon Asset Management was Pershing Square, which amassed a stake valued at $120.4 million. Cardinal Capital, Locust Wood Capital Advisers, and AEW Capital Management were also very fond of the stock, giving the stock large weights in their portfolios.

As industrywide interest jumped, some big names have been driving this bullishness. Laurion Capital Management, managed by Benjamin A. Smith, created the most valuable position in The Howard Hughes Corporation (NYSE:HHC). Laurion Capital Management had $16.3 million invested in the company at the end of the quarter. Michael Gelband’s ExodusPoint Capital also made a $16.1 million investment in the stock during the quarter. The other funds with brand new HHC positions are Richard Mashaal’s Rima Senvest Management, Ken Griffin’s Citadel Investment Group, and Ken Grossman and Glen Schneider’s SG Capital Management.