Hedge funds are not perfect. They have their bad picks just like everyone else. Facebook, a stock hedge funds have loved, lost nearly 40% of its value at one point in 2018. Although hedge funds are not perfect, their consensus picks do deliver solid returns, however. Our data show the top 15 S&P 500 stocks among hedge funds at the end of December 2018 yielded an average return of 19.7% year-to-date, vs. a gain of 13.1% for the S&P 500 Index. Because hedge funds have a lot of resources and their consensus picks do well, we pay attention to what they think. In this article, we analyze what the elite funds think of The Greenbrier Companies, Inc. (NYSE:GBX).

The Greenbrier Companies, Inc. (NYSE:GBX) investors should pay attention to a decrease in hedge fund interest lately. Our calculations also showed that GBX isn’t among the 30 most popular stocks among hedge funds.

Heading into the first quarter of 2019, a total of 11 of the hedge funds tracked by Insider Monkey were long this stock, a change of -27% from the second quarter of 2018. On the other hand, there were a total of 22 hedge funds with a bullish position in GBX a year ago. With the smart money’s capital changing hands, there exists a select group of noteworthy hedge fund managers who were upping their holdings substantially (or already accumulated large positions). 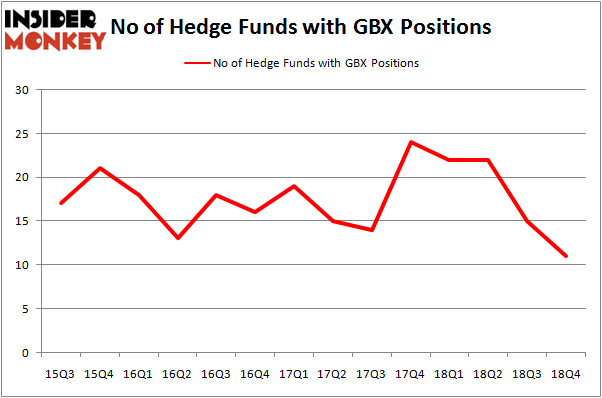 When looking at the institutional investors followed by Insider Monkey, Royce & Associates, managed by Chuck Royce, holds the biggest position in The Greenbrier Companies, Inc. (NYSE:GBX). Royce & Associates has a $15.3 million position in the stock, comprising 0.1% of its 13F portfolio. The second largest stake is held by Jim Simons of Renaissance Technologies, with a $9.9 million position; the fund has less than 0.1%% of its 13F portfolio invested in the stock. Remaining hedge funds and institutional investors that hold long positions contain Richard Rubin’s Hawkeye Capital, John Overdeck and David Siegel’s Two Sigma Advisors and Cliff Asness’s AQR Capital Management.

Since The Greenbrier Companies, Inc. (NYSE:GBX) has witnessed declining sentiment from the aggregate hedge fund industry, it’s safe to say that there lies a certain “tier” of funds that slashed their positions entirely heading into Q3. Interestingly, Nick Niell’s Arrowgrass Capital Partners dropped the biggest position of all the hedgies monitored by Insider Monkey, valued at an estimated $11.7 million in stock, and Alexander Mitchell’s Scopus Asset Management was right behind this move, as the fund sold off about $8.1 million worth. These transactions are intriguing to say the least, as aggregate hedge fund interest was cut by 4 funds heading into Q3.

As you can see these stocks had an average of 14.5 hedge funds with bullish positions and the average amount invested in these stocks was $186 million. That figure was $45 million in GBX’s case. NovaGold Resources Inc. (NYSE:NG) is the most popular stock in this table. On the other hand Blucora Inc (NASDAQ:BCOR) is the least popular one with only 11 bullish hedge fund positions. Compared to these stocks The Greenbrier Companies, Inc. (NYSE:GBX) is even less popular than BCOR. Hedge funds dodged a bullet by taking a bearish stance towards GBX. Our calculations showed that the top 15 most popular hedge fund stocks returned 24.2% through April 22nd and outperformed the S&P 500 ETF (SPY) by more than 7 percentage points. Unfortunately GBX wasn’t nearly as popular as these 15 stock (hedge fund sentiment was very bearish); GBX investors were disappointed as the stock returned -9.7% and underperformed the market. If you are interested in investing in large cap stocks with huge upside potential, you should check out the top 15 most popular stocks) among hedge funds as 13 of these stocks already outperformed the market this year.