The Gap Inc. (NYSE:GPS) has experienced a decrease in enthusiasm from smart money in recent months. Our calculations also showed that GPS isn’t among the 30 most popular stocks among hedge funds.

How are hedge funds trading The Gap Inc. (NYSE:GPS)? 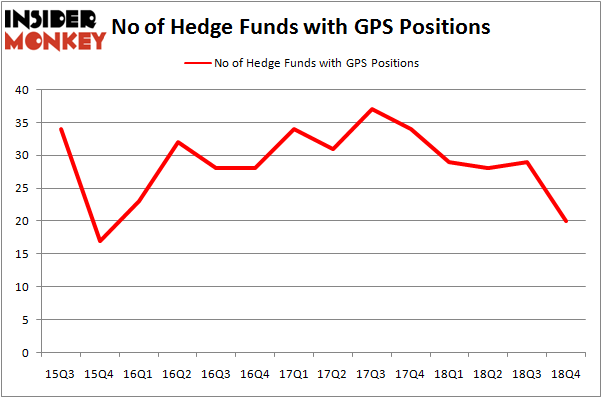 According to Insider Monkey’s hedge fund database, AQR Capital Management, managed by Cliff Asness, holds the number one position in The Gap Inc. (NYSE:GPS). AQR Capital Management has a $158.8 million position in the stock, comprising 0.2% of its 13F portfolio. Coming in second is Ken Griffin of Citadel Investment Group, with a $14.7 million call position; the fund has less than 0.1%% of its 13F portfolio invested in the stock. Other professional money managers that hold long positions include John Tompkins’s Tyvor Capital, Noam Gottesman’s GLG Partners and Ray Dalio’s Bridgewater Associates.

Because The Gap Inc. (NYSE:GPS) has faced falling interest from the smart money, it’s easy to see that there were a few hedge funds that decided to sell off their full holdings in the third quarter. Interestingly, Jeffrey Altman’s Owl Creek Asset Management sold off the largest investment of the 700 funds monitored by Insider Monkey, totaling close to $22.3 million in stock, and Steven Boyd’s Armistice Capital was right behind this move, as the fund sold off about $15.1 million worth. These transactions are intriguing to say the least, as aggregate hedge fund interest was cut by 9 funds in the third quarter.

As you can see these stocks had an average of 23.75 hedge funds with bullish positions and the average amount invested in these stocks was $724 million. That figure was $222 million in GPS’s case. Tapestry, Inc. (NYSE:TPR) is the most popular stock in this table. On the other hand Huaneng Power International Inc (NYSE:HNP) is the least popular one with only 3 bullish hedge fund positions. The Gap Inc. (NYSE:GPS) is not the least popular stock in this group but hedge fund interest is still below average. This is a slightly negative signal and we’d rather spend our time researching stocks that hedge funds are piling on. Our calculations showed that top 15 most popular stocks among hedge funds returned 19.7% through March 15th and outperformed the S&P 500 ETF (SPY) by 6.6 percentage points. Unfortunately GPS wasn’t in this group. Hedge funds that bet on GPS were disappointed as the stock LOST .9% and underperformed the market. If you are interested in investing in large cap stocks, you should check out the top 15 hedge fund stocks as 13 of these outperformed the market.