Looking for stocks with high upside potential? Just follow the big players within the hedge fund industry. Why should you do so? Let’s take a brief look at what statistics have to say about hedge funds’ stock picking abilities to illustrate. The Standard and Poor’s 500 Index returned approximately 13.1% in the 2.5 months of 2019 (including dividend payments). Conversely, hedge funds’ 15 preferred S&P 500 stocks generated a return of 19.7% during the same period, with 93% of these stock picks outperforming the broader market benchmark. Coincidence? It might happen to be so, but it is unlikely. Our research covering the last 18 years indicates that hedge funds’ stock picks generate superior risk-adjusted returns. That’s why we believe it is wise to check hedge fund activity before you invest your time or your savings on a stock like The Cheesecake Factory Incorporated (NASDAQ:CAKE).

The Cheesecake Factory Incorporated (NASDAQ:CAKE) shares haven’t seen a lot of action during the third quarter. Overall, hedge fund sentiment was unchanged. The stock was in 21 hedge funds’ portfolios at the end of December. At the end of this article we will also compare CAKE to other stocks including Dana Incorporated (NYSE:DAN), Imperva Inc (NYSE:IMPV), and Otter Tail Corporation (NASDAQ:OTTR) to get a better sense of its popularity.

What have hedge funds been doing with The Cheesecake Factory Incorporated (NASDAQ:CAKE)?

Heading into the first quarter of 2019, a total of 21 of the hedge funds tracked by Insider Monkey were long this stock, a change of 0% from the second quarter of 2018. On the other hand, there were a total of 19 hedge funds with a bullish position in CAKE a year ago. With hedge funds’ capital changing hands, there exists a few noteworthy hedge fund managers who were adding to their stakes considerably (or already accumulated large positions). 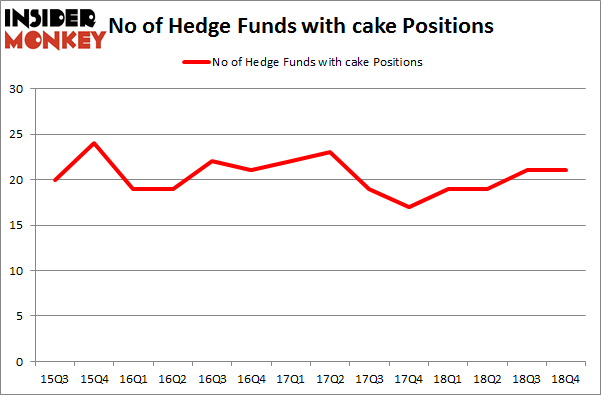 The largest stake in The Cheesecake Factory Incorporated (NASDAQ:CAKE) was held by AQR Capital Management, which reported holding $34.7 million worth of stock at the end of September. It was followed by GAMCO Investors with a $25.1 million position. Other investors bullish on the company included Arrowstreet Capital, Balyasny Asset Management, and Renaissance Technologies.

Since The Cheesecake Factory Incorporated (NASDAQ:CAKE) has witnessed declining sentiment from hedge fund managers, it’s easy to see that there is a sect of fund managers that decided to sell off their entire stakes heading into Q3. It’s worth mentioning that Steven Boyd’s Armistice Capital dumped the largest investment of the “upper crust” of funds followed by Insider Monkey, comprising an estimated $58.9 million in stock. Paul Marshall and Ian Wace’s fund, Marshall Wace LLP, also said goodbye to its stock, about $7.2 million worth. These bearish behaviors are interesting, as total hedge fund interest stayed the same (this is a bearish signal in our experience).

Let’s also examine hedge fund activity in other stocks – not necessarily in the same industry as The Cheesecake Factory Incorporated (NASDAQ:CAKE) but similarly valued. We will take a look at Dana Incorporated (NYSE:DAN), Imperva Inc (NYSE:IMPV), Otter Tail Corporation (NASDAQ:OTTR), and MyoKardia, Inc. (NASDAQ:MYOK). This group of stocks’ market caps are similar to CAKE’s market cap.

As you can see these stocks had an average of 22.25 hedge funds with bullish positions and the average amount invested in these stocks was $344 million. That figure was $177 million in CAKE’s case. Dana Incorporated (NYSE:DAN) is the most popular stock in this table. On the other hand Otter Tail Corporation (NASDAQ:OTTR) is the least popular one with only 12 bullish hedge fund positions. The Cheesecake Factory Incorporated (NASDAQ:CAKE) is not the least popular stock in this group but hedge fund interest is still below average. This is a slightly negative signal and we’d rather spend our time researching stocks that hedge funds are piling on. Our calculations showed that top 15 most popular stocks) among hedge funds returned 24.2% through April 22nd and outperformed the S&P 500 ETF (SPY) by more than 7 percentage points. Unfortunately CAKE wasn’t nearly as popular as these 15 stock (hedge fund sentiment was quite bearish); CAKE investors were disappointed as the stock returned 10.3% and underperformed the market. If you are interested in investing in large cap stocks with huge upside potential, you should check out the top 15 most popular stocks) among hedge funds as 13 of these stocks already outperformed the market this year.