The Bank of Nova Scotia (NYSE:BNS) shares haven’t seen a lot of action during the first quarter. Overall, hedge fund sentiment was unchanged. The stock was in 14 hedge funds’ portfolios at the end of the first quarter of 2019. At the end of this article we will also compare BNS to other stocks including Canadian National Railway Company (NYSE:CNI), Chubb Limited (NYSE:CB), and Eni SpA (NYSE:E) to get a better sense of its popularity.

At the moment there are numerous signals stock traders employ to value publicly traded companies. Some of the most underrated signals are hedge fund and insider trading interest. Our researchers have shown that, historically, those who follow the top picks of the elite money managers can outperform their index-focused peers by a superb amount (see the details here).

We’re going to analyze the new hedge fund action regarding The Bank of Nova Scotia (NYSE:BNS).

What does smart money think about The Bank of Nova Scotia (NYSE:BNS)? 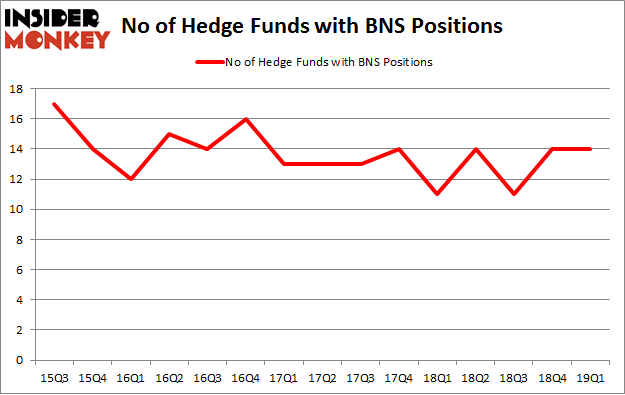 Among these funds, Renaissance Technologies held the most valuable stake in The Bank of Nova Scotia (NYSE:BNS), which was worth $208.3 million at the end of the first quarter. On the second spot was Citadel Investment Group which amassed $194.2 million worth of shares. Moreover, AQR Capital Management, GLG Partners, and Bridgewater Associates were also bullish on The Bank of Nova Scotia (NYSE:BNS), allocating a large percentage of their portfolios to this stock.

Because The Bank of Nova Scotia (NYSE:BNS) has experienced falling interest from the aggregate hedge fund industry, it’s safe to say that there exists a select few fund managers that decided to sell off their entire stakes heading into Q3. At the top of the heap, Paul Marshall and Ian Wace’s Marshall Wace LLP said goodbye to the biggest investment of all the hedgies monitored by Insider Monkey, worth close to $0.6 million in stock. Dmitry Balyasny’s fund, Balyasny Asset Management, also sold off its stock, about $0.4 million worth. These moves are interesting, as total hedge fund interest stayed the same (this is a bearish signal in our experience).

Let’s go over hedge fund activity in other stocks – not necessarily in the same industry as The Bank of Nova Scotia (NYSE:BNS) but similarly valued. We will take a look at Canadian National Railway Company (NYSE:CNI), Chubb Limited (NYSE:CB), Eni SpA (NYSE:E), and Mitsubishi UFJ Financial Group Inc (NYSE:MUFG). This group of stocks’ market valuations are closest to BNS’s market valuation.

As you can see these stocks had an average of 15.75 hedge funds with bullish positions and the average amount invested in these stocks was $697 million. That figure was $519 million in BNS’s case. Chubb Limited (NYSE:CB) is the most popular stock in this table. On the other hand Eni SpA (NYSE:E) is the least popular one with only 9 bullish hedge fund positions. The Bank of Nova Scotia (NYSE:BNS) is not the least popular stock in this group but hedge fund interest is still below average. This is a slightly negative signal and we’d rather spend our time researching stocks that hedge funds are piling on. Our calculations showed that top 20 most popular stocks among hedge funds returned 6.2% in Q2 through June 19th and outperformed the S&P 500 ETF (SPY) by nearly 3 percentage points. Unfortunately BNS wasn’t nearly as popular as these 20 stocks (hedge fund sentiment was quite bearish); BNS investors were disappointed as the stock returned 2.3% during the same time period and underperformed the market. If you are interested in investing in large cap stocks with huge upside potential, you should check out the top 20 most popular stocks among hedge funds as 13 of these stocks already outperformed the market so far in Q2.