Here’s What Hedge Funds Think About The Bancorp, Inc. (TBBK)

After several tireless days we have finished crunching the numbers from nearly 750 13F filings issued by the elite hedge funds and other investment firms that we track at Insider Monkey, which disclosed those firms’ equity portfolios as of December 31. The results of that effort will be put on display in this article, as we share valuable insight into the smart money sentiment towards The Bancorp, Inc. (NASDAQ:TBBK).

Is The Bancorp, Inc. (NASDAQ:TBBK) a buy here? Hedge funds are getting more bullish. The number of bullish hedge fund positions moved up by 1 lately. Our calculations also showed that TBBK isn’t among the 30 most popular stocks among hedge funds.

What does the smart money think about The Bancorp, Inc. (NASDAQ:TBBK)?

Heading into the first quarter of 2019, a total of 14 of the hedge funds tracked by Insider Monkey held long positions in this stock, a change of 8% from the previous quarter. The graph below displays the number of hedge funds with bullish position in TBBK over the last 14 quarters. With hedgies’ sentiment swirling, there exists a few noteworthy hedge fund managers who were increasing their stakes significantly (or already accumulated large positions). 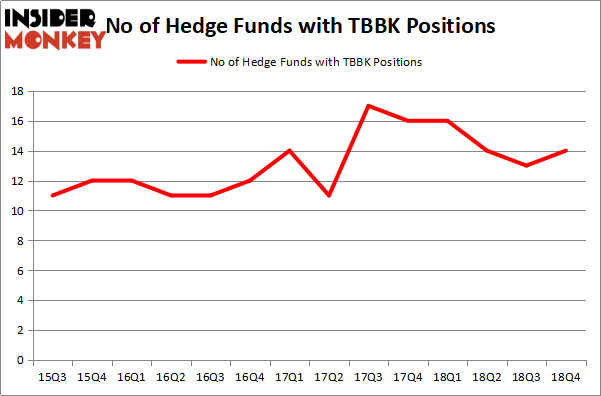 The largest stake in The Bancorp, Inc. (NASDAQ:TBBK) was held by Nantahala Capital Management, which reported holding $19.6 million worth of stock at the end of December. It was followed by Second Curve Capital with a $12.7 million position. Other investors bullish on the company included Rutabaga Capital Management, D E Shaw, and Renaissance Technologies.

Consequently, specific money managers have jumped into The Bancorp, Inc. (NASDAQ:TBBK) headfirst. Royce & Associates, managed by Chuck Royce, established the most valuable position in The Bancorp, Inc. (NASDAQ:TBBK). Royce & Associates had $0 million invested in the company at the end of the quarter. Gavin Saitowitz and Cisco J. del Valle’s Springbok Capital also initiated a $0 million position during the quarter.

Let’s now take a look at hedge fund activity in other stocks – not necessarily in the same industry as The Bancorp, Inc. (NASDAQ:TBBK) but similarly valued. We will take a look at Gritstone Oncology, Inc. (NASDAQ:GRTS), Covia Holdings Corporation (NYSE:CVIA), The First Bancshares, Inc. (MS) (NASDAQ:FBMS), and Access National Corporation (NASDAQ:ANCX). All of these stocks’ market caps are closest to TBBK’s market cap.

As you can see these stocks had an average of 5.25 hedge funds with bullish positions and the average amount invested in these stocks was $46 million. That figure was $70 million in TBBK’s case. Gritstone Oncology, Inc. (NASDAQ:GRTS) is the most popular stock in this table. On the other hand Access National Corporation (NASDAQ:ANCX) is the least popular one with only 2 bullish hedge fund positions. Compared to these stocks The Bancorp, Inc. (NASDAQ:TBBK) is more popular among hedge funds. Our calculations showed that top 15 most popular stocks) among hedge funds returned 24.2% through April 22nd and outperformed the S&P 500 ETF (SPY) by more than 7 percentage points. Unfortunately TBBK wasn’t nearly as popular as these 15 stock and hedge funds that were betting on TBBK were disappointed as the stock returned 3.6% and underperformed the market. If you are interested in investing in large cap stocks with huge upside potential, you should check out the top 15 most popular stocks) among hedge funds as 13 of these stocks already outperformed the market this year.