Here’s What Hedge Funds Think About The Andersons, Inc. (ANDE)

The market has been volatile in the fourth quarter as the Federal Reserve continued its rate hikes to normalize the interest rates. Small cap stocks have been hit hard as a result, as the Russell 2000 ETF (IWM) has underperformed the larger S&P 500 ETF (SPY) by nearly 7 percentage points. SEC filings and hedge fund investor letters indicate that the smart money seems to be paring back their overall long exposure since summer months, and the funds’ movements is one of the reasons why the major indexes have retraced. In this article, we analyze what the smart money thinks of The Andersons, Inc. (NASDAQ:ANDE) and find out how it is affected by hedge funds’ moves.

Is The Andersons, Inc. (NASDAQ:ANDE) a healthy stock for your portfolio? Investors who are in the know are in a bearish mood. The number of bullish hedge fund positions retreated by 2 recently. Our calculations also showed that ande isn’t among the 30 most popular stocks among hedge funds. ANDE was in 6 hedge funds’ portfolios at the end of December. There were 8 hedge funds in our database with ANDE holdings at the end of the previous quarter. 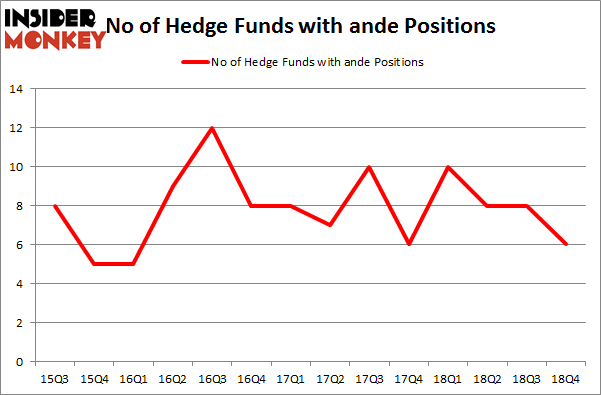 Among these funds, Renaissance Technologies held the most valuable stake in The Andersons, Inc. (NASDAQ:ANDE), which was worth $16.9 million at the end of the fourth quarter. On the second spot was Carlson Capital which amassed $11.4 million worth of shares. Moreover, Rutabaga Capital Management, Millennium Management, and D E Shaw were also bullish on The Andersons, Inc. (NASDAQ:ANDE), allocating a large percentage of their portfolios to this stock.

Due to the fact that The Andersons, Inc. (NASDAQ:ANDE) has experienced falling interest from the aggregate hedge fund industry, logic holds that there were a few money managers who were dropping their positions entirely by the end of the third quarter. At the top of the heap, Ken Griffin’s Citadel Investment Group dumped the largest investment of the “upper crust” of funds monitored by Insider Monkey, comprising an estimated $0.3 million in stock. Matthew Hulsizer’s fund, PEAK6 Capital Management, also said goodbye to its stock, about $0.1 million worth. These moves are interesting, as aggregate hedge fund interest dropped by 2 funds by the end of the third quarter.

As you can see these stocks had an average of 16.75 hedge funds with bullish positions and the average amount invested in these stocks was $154 million. That figure was $47 million in ANDE’s case. Milacron Holdings Corp (NYSE:MCRN) is the most popular stock in this table. On the other hand Sandstorm Gold Ltd. (NYSE:SAND) is the least popular one with only 9 bullish hedge fund positions. Compared to these stocks The Andersons, Inc. (NASDAQ:ANDE) is even less popular than SAND. Our calculations showed that top 15 most popular stocks) among hedge funds returned 24.2% through April 22nd and outperformed the S&P 500 ETF (SPY) by more than 7 percentage points. Unfortunately ANDE wasn’t nearly as popular as these 15 stock and hedge funds that were betting on ANDE were disappointed as the stock returned 9.6% and underperformed the market. If you are interested in investing in large cap stocks with huge upside potential, you should check out the top 15 most popular stocks) among hedge funds as 13 of these stocks already outperformed the market this year.