The fourth quarter was a rough one for most investors, as fears of a rising interest rate environment in the U.S, a trade war with China, and a more or less stagnant Europe, weighed heavily on the minds of investors. Both the S&P 500 and Russell 2000 sank as a result, with the Russell 2000, which is composed of smaller companies, being hit especially hard. This was primarily due to hedge funds, which are big supporters of small-cap stocks, pulling some of their capital out of the volatile markets during this time. Let’s look at how this market volatility affected the sentiment of hedge funds towards Textron Inc. (NYSE:TXT), and what that likely means for the prospects of the company and its stock.

Textron Inc. (NYSE:TXT) has seen an increase in hedge fund sentiment in recent months. Our calculations also showed that TXT isn’t among the 30 most popular stocks among hedge funds. 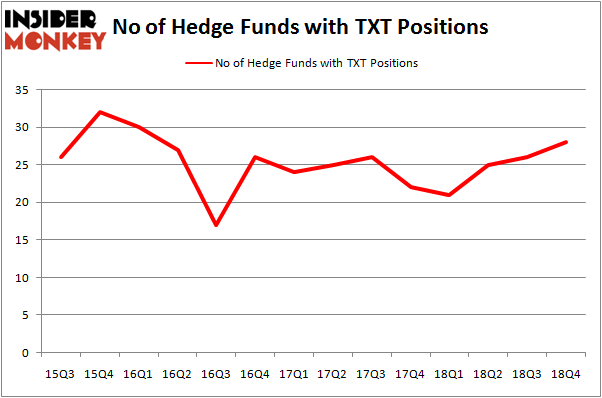 Among these funds, GAMCO Investors held the most valuable stake in Textron Inc. (NYSE:TXT), which was worth $110.6 million at the end of the third quarter. On the second spot was Arrowstreet Capital which amassed $92.5 million worth of shares. Moreover, AQR Capital Management, Levin Capital Strategies, and Adage Capital Management were also bullish on Textron Inc. (NYSE:TXT), allocating a large percentage of their portfolios to this stock.

As aggregate interest increased, some big names were leading the bulls’ herd. Levin Capital Strategies, managed by John A. Levin, created the biggest position in Textron Inc. (NYSE:TXT). Levin Capital Strategies had $66.4 million invested in the company at the end of the quarter. Jim Simons’s Renaissance Technologies also made a $22.8 million investment in the stock during the quarter. The following funds were also among the new TXT investors: Steve Cohen’s Point72 Asset Management, Paul Tudor Jones’s Tudor Investment Corp, and Bruce Kovner’s Caxton Associates LP.

As you can see these stocks had an average of 36.75 hedge funds with bullish positions and the average amount invested in these stocks was $1703 million. That figure was $581 million in TXT’s case. Vistra Energy Corp. (NYSE:VST) is the most popular stock in this table. On the other hand Seagate Technology plc (NASDAQ:STX) is the least popular one with only 26 bullish hedge fund positions. Textron Inc. (NYSE:TXT) is not the least popular stock in this group but hedge fund interest is still below average. This is a slightly negative signal and we’d rather spend our time researching stocks that hedge funds are piling on. Our calculations showed that top 15 most popular stocks among hedge funds returned 19.7% through March 15th and outperformed the S&P 500 ETF (SPY) by 6.6 percentage points. Unfortunately TXT wasn’t in this group. Hedge funds that bet on TXT were disappointed as the stock returned 12.6% and underperformed the market. If you are interested in investing in large cap stocks, you should check out the top 15 hedge fund stocks as 13 of these outperformed the market.