Looking for stocks with high upside potential? Just follow the big players within the hedge fund industry. Why should you do so? Let’s take a brief look at what statistics have to say about hedge funds’ stock picking abilities to illustrate. The Standard and Poor’s 500 Index returned approximately 12.1% in 2019 (through May 30th). Conversely, hedge funds’ 20 preferred S&P 500 stocks generated a return of 18.7% during the same period, with the majority of these stock picks outperforming the broader market benchmark. Coincidence? It might happen to be so, but it is unlikely. Our research covering the last 18 years indicates that hedge funds’ stock picks generate superior risk-adjusted returns. That’s why we believe it is wise to check hedge fund activity before you invest your time or your savings on a stock like Teradata Corporation (NYSE:TDC).

Is Teradata Corporation (NYSE:TDC) a buy right now? Money managers are taking a bearish view. The number of long hedge fund positions went down by 1 in recent months. Our calculations also showed that TDC isn’t among the 30 most popular stocks among hedge funds.

What have hedge funds been doing with Teradata Corporation (NYSE:TDC)?

Heading into the second quarter of 2019, a total of 20 of the hedge funds tracked by Insider Monkey held long positions in this stock, a change of -5% from one quarter earlier. The graph below displays the number of hedge funds with bullish position in TDC over the last 15 quarters. So, let’s examine which hedge funds were among the top holders of the stock and which hedge funds were making big moves. 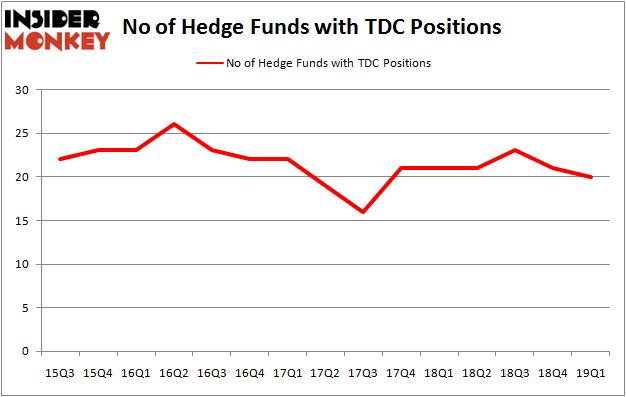 When looking at the institutional investors followed by Insider Monkey, Jim Simons’s Renaissance Technologies has the biggest position in Teradata Corporation (NYSE:TDC), worth close to $177.1 million, amounting to 0.2% of its total 13F portfolio. The second most bullish fund manager is Arrowstreet Capital, managed by Peter Rathjens, Bruce Clarke and John Campbell, which holds a $37.8 million position; 0.1% of its 13F portfolio is allocated to the company. Some other professional money managers that are bullish encompass John Overdeck and David Siegel’s Two Sigma Advisors, D. E. Shaw’s D E Shaw and Noam Gottesman’s GLG Partners.

Due to the fact that Teradata Corporation (NYSE:TDC) has experienced a decline in interest from the aggregate hedge fund industry, it’s easy to see that there was a specific group of hedge funds that decided to sell off their positions entirely by the end of the third quarter. Interestingly, Anand Parekh’s Alyeska Investment Group said goodbye to the biggest stake of all the hedgies watched by Insider Monkey, valued at close to $4.1 million in stock, and Michael Platt and William Reeves’s BlueCrest Capital Mgmt. was right behind this move, as the fund sold off about $0.7 million worth. These moves are important to note, as total hedge fund interest dropped by 1 funds by the end of the third quarter.

As you can see these stocks had an average of 17.75 hedge funds with bullish positions and the average amount invested in these stocks was $545 million. That figure was $294 million in TDC’s case. Pegasystems Inc. (NASDAQ:PEGA) is the most popular stock in this table. On the other hand Semiconductor Manufacturing International Corporation (NYSE:SMI) is the least popular one with only 4 bullish hedge fund positions. Teradata Corporation (NYSE:TDC) is not the most popular stock in this group but hedge fund interest is still above average. This is a slightly positive signal but we’d rather spend our time researching stocks that hedge funds are piling on. Our calculations showed that top 20 most popular stocks among hedge funds returned 1.9% in Q2 through May 30th and outperformed the S&P 500 ETF (SPY) by more than 3 percentage points. Unfortunately TDC wasn’t nearly as popular as these 20 stocks and hedge funds that were betting on TDC were disappointed as the stock returned -19.7% during the same period and underperformed the market. If you are interested in investing in large cap stocks with huge upside potential, you should check out the top 20 most popular stocks among hedge funds as 13 of these stocks already outperformed the market so far in Q2.

Did Hedge Funds Drop The Ball On LPL Financial Holdings Inc (LPLA) ?
Monthly Newsletter Strategy
Download a free copy of our newsletter and see the details inside!
Hedge Fund Resource Center
Related News
Here’s What Hedge Funds Think About (TDC) Is Teradata Corporation (TDC) A Good Stock To Buy? Is Teradata Corporation (TDC) A Good Stock To Buy? Here’s Why TASER International, Heron Therapeutics and Three Other Stocks Are Trading Lower on Monday A Closer Look at Five Tech Stocks in Spotlight on Tuesday Why Teradata, Envision Healthcare, LSB Industries & Two Other Stocks Are Among Top Gainers Today? Why These 5 Stocks are Pushing the Market Up on Thursday 21 Best Tinder Bio Examples for Newly Single Moms 17 Best Excuses to Get Out of Work 25 Best Bumble Bios For Girls
Billionaire Hedge Funds