Teradata Corporation (NYSE:TDC) was in 21 hedge funds’ portfolios at the end of December. TDC investors should be aware of a decrease in enthusiasm from smart money of late. There were 23 hedge funds in our database with TDC holdings at the end of the previous quarter. Our calculations also showed that TDC isn’t among the 30 most popular stocks among hedge funds.

To most investors, hedge funds are perceived as slow, outdated financial tools of the past. While there are more than 8000 funds with their doors open at the moment, Our researchers hone in on the masters of this group, approximately 750 funds. These money managers shepherd the lion’s share of the hedge fund industry’s total asset base, and by watching their inimitable picks, Insider Monkey has determined a number of investment strategies that have historically exceeded the broader indices. Insider Monkey’s flagship hedge fund strategy outpaced the S&P 500 index by nearly 5 percentage points a year since its inception in May 2014 through early November 2018. We were able to generate large returns even by identifying short candidates. Our portfolio of short stocks lost 27.5% since February 2017 (through March 12th) even though the market was up nearly 25% during the same period. We just shared a list of 6 short targets in our latest quarterly update and they are already down an average of 6% in less than a month.

We’re going to take a look at the key hedge fund action regarding Teradata Corporation (NYSE:TDC). 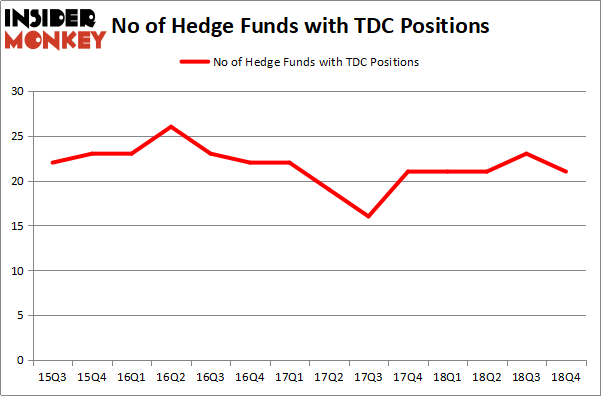 Among these funds, Renaissance Technologies held the most valuable stake in Teradata Corporation (NYSE:TDC), which was worth $73.3 million at the end of the third quarter. On the second spot was Citadel Investment Group which amassed $28.5 million worth of shares. Moreover, D E Shaw, Millennium Management, and Balyasny Asset Management were also bullish on Teradata Corporation (NYSE:TDC), allocating a large percentage of their portfolios to this stock.

Since Teradata Corporation (NYSE:TDC) has witnessed a decline in interest from the smart money, logic holds that there lies a certain “tier” of money managers who were dropping their entire stakes in the third quarter. Intriguingly, Kevin Oram and Peter Uddo’s Praesidium Investment Management Company dropped the largest stake of the “upper crust” of funds watched by Insider Monkey, totaling an estimated $54.5 million in call options, and Dmitry Balyasny’s Balyasny Asset Management was right behind this move, as the fund said goodbye to about $27.7 million worth. These moves are intriguing to say the least, as total hedge fund interest dropped by 2 funds in the third quarter.

As you can see these stocks had an average of 22 hedge funds with bullish positions and the average amount invested in these stocks was $278 million. That figure was $212 million in TDC’s case. Hanesbrands Inc. (NYSE:HBI) is the most popular stock in this table. On the other hand Catalent Inc (NYSE:CTLT) is the least popular one with only 19 bullish hedge fund positions. Teradata Corporation (NYSE:TDC) is not the least popular stock in this group but hedge fund interest is still below average. Our calculations showed that top 15 most popular stocks) among hedge funds returned 24.2% through April 22nd and outperformed the S&P 500 ETF (SPY) by more than 7 percentage points. A small number of hedge funds were also right about betting on TDC, though not to the same extent, as the stock returned 17.6% and outperformed the market as well.

Were Hedge Funds Right About Piling Into Owens Corning (OC)?
Monthly Newsletter Strategy
Download a free copy of our newsletter and see the details inside!
Hedge Fund Resource Center
Related News
Is Teradata Corporation (TDC) A Good Stock To Buy? Is Teradata Corporation (TDC) A Good Stock To Buy? Here’s Why TASER International, Heron Therapeutics and Three Other Stocks Are Trading Lower on Monday A Closer Look at Five Tech Stocks in Spotlight on Tuesday Why Teradata, Envision Healthcare, LSB Industries & Two Other Stocks Are Among Top Gainers Today? Why These 5 Stocks are Pushing the Market Up on Thursday Hedge Funds Are Selling Teradata Corporation (TDC) 20 Clever Bumble Bios for Guys 15 Most Physically Demanding Olympic Sports Hedge Funds Have Never Been This Bullish On Visa Inc (V)
Billionaire Hedge Funds