Tata Motors Limited (NYSE:TTM) shares haven’t seen a lot of action during the third quarter. Overall, hedge fund sentiment was unchanged. The stock was in 9 hedge funds’ portfolios at the end of December. At the end of this article we will also compare TTM to other stocks including Trimble Inc. (NASDAQ:TRMB), Targa Resources Corp (NYSE:TRGP), and Camden Property Trust (NYSE:CPT) to get a better sense of its popularity.

How have hedgies been trading Tata Motors Limited (NYSE:TTM)? 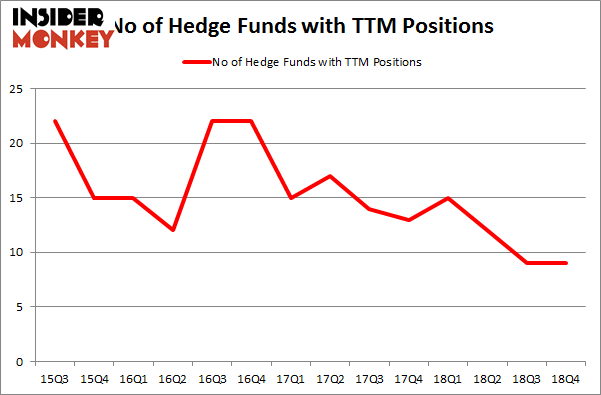 More specifically, Renaissance Technologies was the largest shareholder of Tata Motors Limited (NYSE:TTM), with a stake worth $49.9 million reported as of the end of September. Trailing Renaissance Technologies was LMR Partners, which amassed a stake valued at $46 million. AQR Capital Management, Citadel Investment Group, and GLG Partners were also very fond of the stock, giving the stock large weights in their portfolios.

Seeing as Tata Motors Limited (NYSE:TTM) has faced declining sentiment from the entirety of the hedge funds we track, logic holds that there was a specific group of money managers who were dropping their positions entirely heading into Q3. Interestingly, Paul Marshall and Ian Wace’s Marshall Wace LLP sold off the biggest position of all the hedgies followed by Insider Monkey, comprising about $11.5 million in stock, and Israel Englander’s Millennium Management was right behind this move, as the fund dumped about $6.4 million worth. These bearish behaviors are important to note, as total hedge fund interest stayed the same (this is a bearish signal in our experience).

As you can see these stocks had an average of 24.75 hedge funds with bullish positions and the average amount invested in these stocks was $391 million. That figure was $108 million in TTM’s case. Targa Resources Corp (NYSE:TRGP) is the most popular stock in this table. On the other hand Trimble Inc. (NASDAQ:TRMB) is the least popular one with only 17 bullish hedge fund positions. Compared to these stocks Tata Motors Limited (NYSE:TTM) is even less popular than TRMB. Considering that hedge funds aren’t fond of this stock in relation to other companies analyzed in this article, it may be a good idea to analyze it in detail and understand why the smart money isn’t behind this stock. This isn’t necessarily bad news. Although it is possible that hedge funds may think the stock is overpriced and view the stock as a short candidate, they may not be very familiar with the bullish thesis. Our calculations showed that top 15 most popular stocks among hedge funds returned 21.3% through April 8th and outperformed the S&P 500 ETF (SPY) by more than 5 percentage points. A handful of hedge funds were also right about betting on TTM, though not to the same extent, as the stock returned 19% and outperformed the market as well.