The government requires hedge funds and wealthy investors that crossed the $100 million equity holdings threshold are required to file a report that shows their positions at the end of every quarter. Even though it isn’t the intention, these filings level the playing field for ordinary investors. The latest round of 13F filings disclosed the funds’ positions on December 31. We at Insider Monkey have made an extensive database of nearly 750 of those elite funds and prominent investors’ filings. In this article, we analyze how these elite funds and prominent investors traded Tapestry, Inc. (NYSE:TPR) based on those filings.

Is Tapestry, Inc. (NYSE:TPR) going to take off soon? The best stock pickers are getting more optimistic. The number of long hedge fund positions advanced by 5 in recent months. Our calculations also showed that TPR isn’t among the 30 most popular stocks among hedge funds.

What have hedge funds been doing with Tapestry, Inc. (NYSE:TPR)? 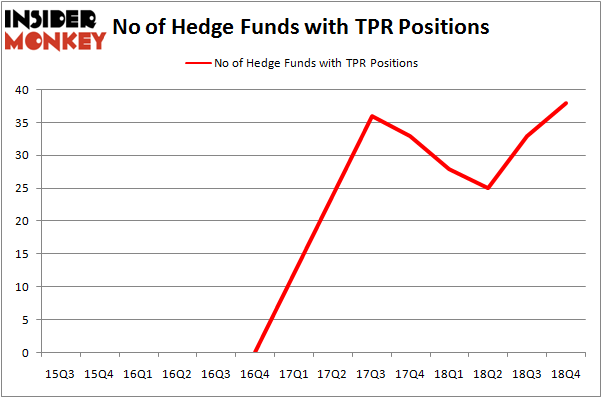 More specifically, Renaissance Technologies was the largest shareholder of Tapestry, Inc. (NYSE:TPR), with a stake worth $107.3 million reported as of the end of September. Trailing Renaissance Technologies was D E Shaw, which amassed a stake valued at $64.2 million. Arrowstreet Capital, Two Sigma Advisors, and Citadel Investment Group were also very fond of the stock, giving the stock large weights in their portfolios.

Now, key hedge funds have jumped into Tapestry, Inc. (NYSE:TPR) headfirst. Scopus Asset Management, managed by Alexander Mitchell, created the most valuable call position in Tapestry, Inc. (NYSE:TPR). Scopus Asset Management had $16.9 million invested in the company at the end of the quarter. Andrew Feldstein and Stephen Siderow’s Blue Mountain Capital also made a $7.4 million investment in the stock during the quarter. The other funds with new positions in the stock are David Costen Haley’s HBK Investments, Ward Davis and Brian Agnew’s Caerus Global Investors, and Ian Simm’s Impax Asset Management.

As you can see these stocks had an average of 19.75 hedge funds with bullish positions and the average amount invested in these stocks was $334 million. That figure was $579 million in TPR’s case. WestRock Company (NYSE:WRK) is the most popular stock in this table. On the other hand Braskem SA (NYSE:BAK) is the least popular one with only 9 bullish hedge fund positions. Compared to these stocks Tapestry, Inc. (NYSE:TPR) is more popular among hedge funds. Considering that hedge funds are fond of this stock in relation to its market cap peers, it may be a good idea to analyze it in detail and potentially include it in your portfolio. Our calculations showed that top 15 most popular stocks among hedge funds returned 19.7% through March 15th and outperformed the S&P 500 ETF (SPY) by 6.6 percentage points. Unfortunately TPR wasn’t in this group. Hedge funds that bet on TPR were disappointed as the stock lost 3.6% and underperformed the market. If you are interested in investing in large cap stocks, you should check out the top 15 hedge fund stocks as 13 of these outperformed the market.