Is Talend S.A. (NASDAQ:TLND) a buy, sell, or hold? Prominent investors are becoming less hopeful. The number of bullish hedge fund positions went down by 8 lately. Our calculations also showed that TLND isn’t among the 30 most popular stocks among hedge funds (see the video below). 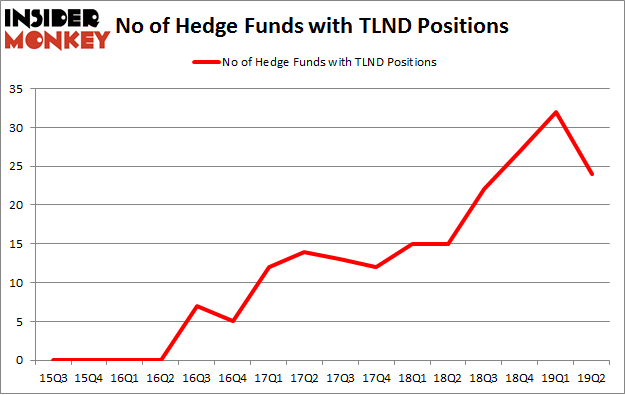 Judging by the fact that Talend S.A. (NASDAQ:TLND) has experienced bearish sentiment from hedge fund managers, it’s easy to see that there exists a select few hedge funds who sold off their entire stakes by the end of the second quarter. Intriguingly, Derek C. Schrier’s Indaba Capital Management dropped the biggest investment of the 750 funds followed by Insider Monkey, valued at an estimated $13.9 million in stock. Zachary Miller’s fund, Parian Global Management, also said goodbye to its stock, about $13.2 million worth. These bearish behaviors are important to note, as total hedge fund interest dropped by 8 funds by the end of the second quarter.

Medpace Holdings, Inc. (MEDP): These Hedge Funds Cashed Out Too Early
Monthly Newsletter Strategy
Download a free copy of our newsletter and see the details inside!
Hedge Fund Resource Center
Related News
Hedge Funds Have Never Been This Bullish On Talend S.A. (TLND) Praesidium Investment Management’s Return, AUM, and Holdings Is Talend S.A. (NASDAQ:TLND) A Good Stock To Buy? Highlights From The Sohn Conference in San Francisco Do Hedge Funds Love Talend SA ADR (TLND)? Here’s Why Hortonworks, Talend, Deutsche Bank, and More Are in the Spotlight 11 Largest Auto Insurance Companies In The US In 2019 10 Poorest Cities in America in 2019 8 Lowest Tar and Nicotine Cigarette Brands in 2019
Billionaire Hedge Funds