As we already know from media reports and hedge fund investor letters, many hedge funds lost money in fourth quarter, blaming macroeconomic conditions and unpredictable events that hit several sectors, with technology among them. Nevertheless, most investors decided to stick to their bullish theses and their long-term focus allows us to profit from the recent declines. In particular, let’s take a look at what hedge funds think about Systemax Inc. (NYSE:SYX) in this article.

Systemax Inc. (NYSE:SYX) was in 11 hedge funds’ portfolios at the end of December. SYX investors should be aware of a decrease in hedge fund sentiment of late. There were 14 hedge funds in our database with SYX positions at the end of the previous quarter. Our calculations also showed that syx isn’t among the 30 most popular stocks among hedge funds.

In the eyes of most market participants, hedge funds are assumed to be worthless, outdated investment vehicles of yesteryear. While there are greater than 8000 funds in operation today, Our researchers choose to focus on the bigwigs of this club, around 750 funds. Most estimates calculate that this group of people watch over the lion’s share of the smart money’s total capital, and by following their finest picks, Insider Monkey has revealed numerous investment strategies that have historically outstripped the broader indices. Insider Monkey’s flagship hedge fund strategy defeated the S&P 500 index by nearly 5 percentage points per year since its inception in May 2014 through early November 2018. We were able to generate large returns even by identifying short candidates. Our portfolio of short stocks lost 27.5% since February 2017 (through March 12th) even though the market was up nearly 25% during the same period. We just shared a list of 6 short targets in our latest quarterly update and they are already down an average of 6% in less than a month.

At Q4’s end, a total of 11 of the hedge funds tracked by Insider Monkey were long this stock, a change of -21% from the previous quarter. The graph below displays the number of hedge funds with bullish position in SYX over the last 14 quarters. With hedge funds’ capital changing hands, there exists a few noteworthy hedge fund managers who were boosting their holdings significantly (or already accumulated large positions). 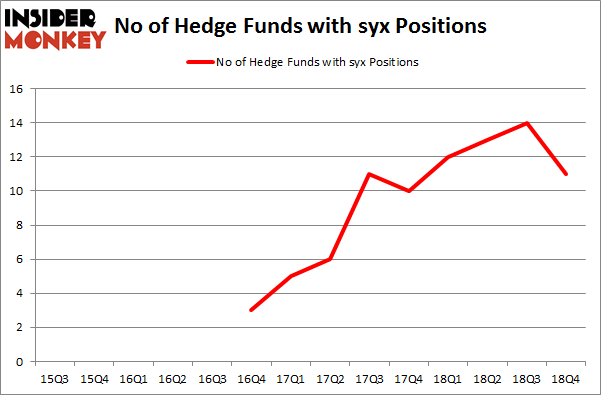 Of the funds tracked by Insider Monkey, Cliff Asness’s AQR Capital Management has the largest position in Systemax Inc. (NYSE:SYX), worth close to $7.2 million, comprising less than 0.1%% of its total 13F portfolio. Sitting at the No. 2 spot is Citadel Investment Group, managed by Ken Griffin, which holds a $4.7 million position; less than 0.1%% of its 13F portfolio is allocated to the company. Remaining professional money managers that hold long positions encompass Chuck Royce’s Royce & Associates, Jim Simons’s Renaissance Technologies and George McCabe’s Portolan Capital Management.

Judging by the fact that Systemax Inc. (NYSE:SYX) has experienced falling interest from the smart money, it’s safe to say that there was a specific group of money managers that slashed their full holdings heading into Q3. Interestingly, Israel Englander’s Millennium Management dropped the largest position of the “upper crust” of funds monitored by Insider Monkey, valued at an estimated $2.4 million in stock, and Peter Algert and Kevin Coldiron’s Algert Coldiron Investors was right behind this move, as the fund sold off about $0.5 million worth. These bearish behaviors are interesting, as total hedge fund interest dropped by 3 funds heading into Q3.

As you can see these stocks had an average of 10.5 hedge funds with bullish positions and the average amount invested in these stocks was $151 million. That figure was $26 million in SYX’s case. BioCryst Pharmaceuticals, Inc. (NASDAQ:BCRX) is the most popular stock in this table. On the other hand AGM Group Holdings Inc. (NASDAQ:AGMH) is the least popular one with only 1 bullish hedge fund positions. Systemax Inc. (NYSE:SYX) is not the most popular stock in this group but hedge fund interest is still above average. This is a slightly positive signal but we’d rather spend our time researching stocks that hedge funds are piling on. Our calculations showed that top 15 most popular stocks) among hedge funds returned 24.2% through April 22nd and outperformed the S&P 500 ETF (SPY) by more than 7 percentage points. Unfortunately SYX wasn’t nearly as popular as these 15 stock and hedge funds that were betting on SYX were disappointed as the stock returned -6.9% and underperformed the market. If you are interested in investing in large cap stocks with huge upside potential, you should check out the top 15 most popular stocks) among hedge funds as 13 of these stocks already outperformed the market this year.