Before we spend countless hours researching a company, we like to analyze what insiders, hedge funds and billionaire investors think of the stock first. This is a necessary first step in our investment process because our research has shown that the elite investors’ consensus returns have been exceptional. In the following paragraphs, we find out what the billionaire investors and hedge funds think of SYNNEX Corporation (NYSE:SNX).

Hedge fund interest in SYNNEX Corporation (NYSE:SNX) shares was flat at the end of last quarter. This is usually a negative indicator. The level and the change in hedge fund popularity aren’t the only variables you need to analyze to decipher hedge funds’ perspectives. A stock may witness a boost in popularity but it may still be less popular than similarly priced stocks. That’s why at the end of this article we will examine companies such as Horizon Therapeutics Public Limited Company (NASDAQ:HZNP), Globus Medical Inc (NYSE:GMED), and H&R Block, Inc. (NYSE:HRB) to gather more data points.

At Q1’s end, a total of 11 of the hedge funds tracked by Insider Monkey were bullish on this stock, a change of 0% from one quarter earlier. Below, you can check out the change in hedge fund sentiment towards SNX over the last 15 quarters. With hedgies’ positions undergoing their usual ebb and flow, there exists a select group of key hedge fund managers who were upping their stakes substantially (or already accumulated large positions). 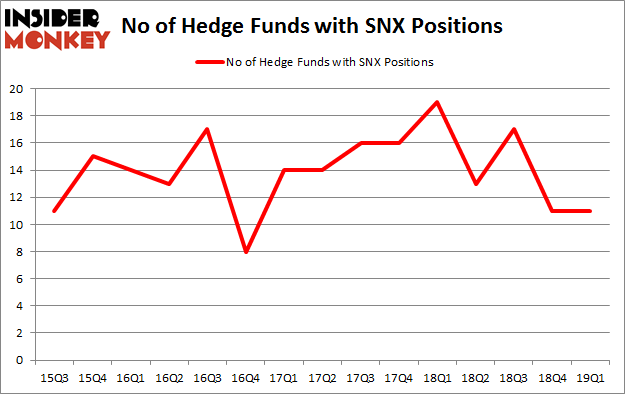 Of the funds tracked by Insider Monkey, Ken Griffin’s Citadel Investment Group has the biggest position in SYNNEX Corporation (NYSE:SNX), worth close to $60.2 million, corresponding to less than 0.1%% of its total 13F portfolio. The second largest stake is held by Alyeska Investment Group, managed by Anand Parekh, which holds a $45.8 million position; the fund has 0.6% of its 13F portfolio invested in the stock. Remaining professional money managers with similar optimism include Cliff Asness’s AQR Capital Management, Jim Simons’s Renaissance Technologies and Doug Gordon, Jon Hilsabeck and Don Jabro’s Shellback Capital.

Since SYNNEX Corporation (NYSE:SNX) has faced bearish sentiment from hedge fund managers, it’s easy to see that there is a sect of money managers that slashed their positions entirely by the end of the third quarter. It’s worth mentioning that John Overdeck and David Siegel’s Two Sigma Advisors cut the biggest position of all the hedgies monitored by Insider Monkey, totaling close to $27.9 million in call options, and D. E. Shaw’s D E Shaw was right behind this move, as the fund dumped about $1.3 million worth. These transactions are intriguing to say the least, as total hedge fund interest stayed the same (this is a bearish signal in our experience).

As you can see these stocks had an average of 25.5 hedge funds with bullish positions and the average amount invested in these stocks was $559 million. That figure was $158 million in SNX’s case. Horizon Therapeutics Public Limited Company (NASDAQ:HZNP) is the most popular stock in this table. On the other hand H&R Block, Inc. (NYSE:HRB) is the least popular one with only 16 bullish hedge fund positions. Compared to these stocks SYNNEX Corporation (NYSE:SNX) is even less popular than HRB. Hedge funds dodged a bullet by taking a bearish stance towards SNX. Our calculations showed that the top 20 most popular hedge fund stocks returned 6.2% in Q2 through June 19th and outperformed the S&P 500 ETF (SPY) by nearly 3 percentage points. Unfortunately SNX wasn’t nearly as popular as these 20 stocks (hedge fund sentiment was very bearish); SNX investors were disappointed as the stock returned -0.7% during the same time frame and underperformed the market. If you are interested in investing in large cap stocks with huge upside potential, you should check out the top 20 most popular stocks among hedge funds as 13 of these stocks already outperformed the market so far in the second quarter.