The 700+ hedge funds and money managers tracked by Insider Monkey have already compiled and submitted their 13F filings for the fourth quarter, which unveil their equity positions as of December 31. We went through these filings, fixed typos and other more significant errors and identified the changes in hedge fund positions. Our extensive review of these public filings is finally over, so this article is set to reveal the smart money sentiment towards Sykes Enterprises, Incorporated (NASDAQ:SYKE).

Hedge fund interest in Sykes Enterprises, Incorporated (NASDAQ:SYKE) shares was flat at the end of last quarter. This is usually a negative indicator. At the end of this article we will also compare SYKE to other stocks including Hollysys Automation Technologies Ltd (NASDAQ:HOLI), Sleep Number Corporation (NASDAQ:SNBR), and Engility Holdings Inc (NYSE:EGL) to get a better sense of its popularity.

In the eyes of most investors, hedge funds are assumed to be worthless, old investment vehicles of the past. While there are greater than 8000 funds in operation at present, Our researchers hone in on the top tier of this group, around 750 funds. These investment experts manage the lion’s share of the smart money’s total capital, and by keeping an eye on their matchless stock picks, Insider Monkey has identified various investment strategies that have historically surpassed the market. Insider Monkey’s flagship hedge fund strategy outrun the S&P 500 index by nearly 5 percentage points a year since its inception in May 2014 through early November 2018. We were able to generate large returns even by identifying short candidates. Our portfolio of short stocks lost 27.5% since February 2017 (through March 12th) even though the market was up nearly 25% during the same period. We just shared a list of 6 short targets in our latest quarterly update and they are already down an average of 6% in less than a month.

What have hedge funds been doing with Sykes Enterprises, Incorporated (NASDAQ:SYKE)? 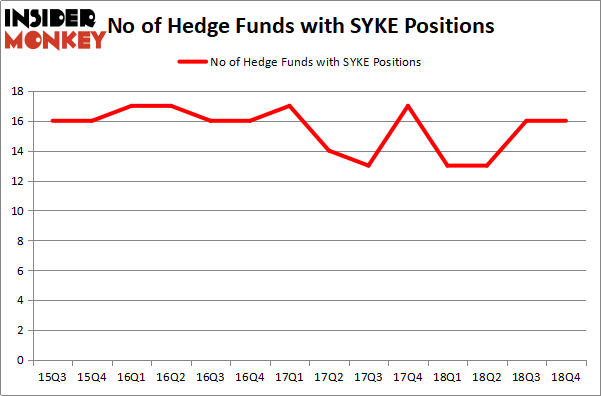 The largest stake in Sykes Enterprises, Incorporated (NASDAQ:SYKE) was held by Renaissance Technologies, which reported holding $15 million worth of stock at the end of December. It was followed by Arrowstreet Capital with a $7.1 million position. Other investors bullish on the company included AQR Capital Management, Intrepid Capital Management, and Citadel Investment Group.

Since Sykes Enterprises, Incorporated (NASDAQ:SYKE) has experienced declining sentiment from the aggregate hedge fund industry, it’s safe to say that there exists a select few fund managers who sold off their full holdings in the third quarter. At the top of the heap, Israel Englander’s Millennium Management dropped the largest investment of the “upper crust” of funds watched by Insider Monkey, valued at close to $1.4 million in stock, and Mike Vranos’s Ellington was right behind this move, as the fund said goodbye to about $0.4 million worth. These bearish behaviors are intriguing to say the least, as aggregate hedge fund interest stayed the same (this is a bearish signal in our experience).

As you can see these stocks had an average of 13.75 hedge funds with bullish positions and the average amount invested in these stocks was $86 million. That figure was $40 million in SYKE’s case. Sleep Number Corporation (NASDAQ:SNBR) is the most popular stock in this table. On the other hand Installed Building Products Inc (NYSE:IBP) is the least popular one with only 8 bullish hedge fund positions. Sykes Enterprises, Incorporated (NASDAQ:SYKE) is not the most popular stock in this group but hedge fund interest is still above average. This is a slightly positive signal but we’d rather spend our time researching stocks that hedge funds are piling on. Our calculations showed that top 15 most popular stocks) among hedge funds returned 24.2% through April 22nd and outperformed the S&P 500 ETF (SPY) by more than 7 percentage points. Unfortunately SYKE wasn’t nearly as popular as these 15 stock and hedge funds that were betting on SYKE were disappointed as the stock returned 10.7% and underperformed the market. If you are interested in investing in large cap stocks with huge upside potential, you should check out the top 15 most popular stocks) among hedge funds as 13 of these stocks already outperformed the market this year.