Hedge funds are not perfect. They have their bad picks just like everyone else. Facebook, a stock hedge funds have loved dearly, lost nearly 40% of its value at one point in 2018. Although hedge funds are not perfect, their consensus picks do deliver solid returns, however. Our data show the top 20 S&P 500 stocks among hedge funds beat the S&P 500 Index by 4 percentage points so far in 2019. Because hedge funds have a lot of resources and their consensus picks do well, we pay attention to what they think. In this article, we analyze what the elite funds think of Sykes Enterprises, Incorporated (NASDAQ:SYKE).

Sykes Enterprises, Incorporated (NASDAQ:SYKE) has experienced a decrease in enthusiasm from smart money recently. SYKE was in 15 hedge funds’ portfolios at the end of June. There were 17 hedge funds in our database with SYKE positions at the end of the previous quarter. Our calculations also showed that SYKE isn’t among the 30 most popular stocks among hedge funds (see the video below).

Heading into the third quarter of 2019, a total of 15 of the hedge funds tracked by Insider Monkey were bullish on this stock, a change of -12% from the previous quarter. Below, you can check out the change in hedge fund sentiment towards SYKE over the last 16 quarters. So, let’s review which hedge funds were among the top holders of the stock and which hedge funds were making big moves. 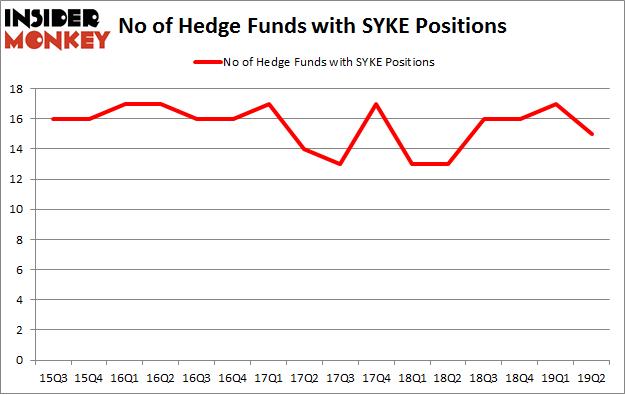 According to publicly available hedge fund and institutional investor holdings data compiled by Insider Monkey, Renaissance Technologies has the most valuable position in Sykes Enterprises, Incorporated (NASDAQ:SYKE), worth close to $17.7 million, corresponding to less than 0.1%% of its total 13F portfolio. The second most bullish fund manager is Arrowstreet Capital, led by Peter Rathjens, Bruce Clarke and John Campbell, holding a $12.2 million position; the fund has less than 0.1%% of its 13F portfolio invested in the stock. Other professional money managers that hold long positions consist of Mark Travis’s Intrepid Capital Management, Cliff Asness’s AQR Capital Management and Paul Marshall and Ian Wace’s Marshall Wace LLP.

Due to the fact that Sykes Enterprises, Incorporated (NASDAQ:SYKE) has witnessed a decline in interest from the entirety of the hedge funds we track, logic holds that there was a specific group of funds that elected to cut their entire stakes heading into Q3. Intriguingly, Paul Tudor Jones’s Tudor Investment Corp dropped the biggest stake of all the hedgies followed by Insider Monkey, totaling close to $0.5 million in stock. Jeffrey Talpins’s fund, Element Capital Management, also sold off its stock, about $0.2 million worth. These moves are important to note, as total hedge fund interest fell by 2 funds heading into Q3.

As you can see these stocks had an average of 15.25 hedge funds with bullish positions and the average amount invested in these stocks was $188 million. That figure was $55 million in SYKE’s case. Talend S.A. (NASDAQ:TLND) is the most popular stock in this table. On the other hand KKR Real Estate Finance Trust Inc. (NYSE:KREF) is the least popular one with only 9 bullish hedge fund positions. Sykes Enterprises, Incorporated (NASDAQ:SYKE) is not the least popular stock in this group but hedge fund interest is still below average. Our calculations showed that top 20 most popular stocks among hedge funds returned 24.4% in 2019 through September 30th and outperformed the S&P 500 ETF (SPY) by 4 percentage points. A small number of hedge funds were also right about betting on SYKE as the stock returned 11.6% during the same time frame and outperformed the market by an even larger margin.