We at Insider Monkey have gone over 738 13F filings that hedge funds and prominent investors are required to file by the SEC The 13F filings show the funds’ and investors’ portfolio positions as of March 31st. In this article, we look at what those funds think of Sun Life Financial Inc. (NYSE:SLF) based on that data.

Is Sun Life Financial Inc. (NYSE:SLF) a buy right now? The smart money is becoming hopeful. The number of bullish hedge fund positions moved up by 1 lately. Our calculations also showed that SLF isn’t among the 30 most popular stocks among hedge funds.

At Q1’s end, a total of 11 of the hedge funds tracked by Insider Monkey were long this stock, a change of 10% from one quarter earlier. On the other hand, there were a total of 8 hedge funds with a bullish position in SLF a year ago. With the smart money’s capital changing hands, there exists a few key hedge fund managers who were adding to their holdings meaningfully (or already accumulated large positions). 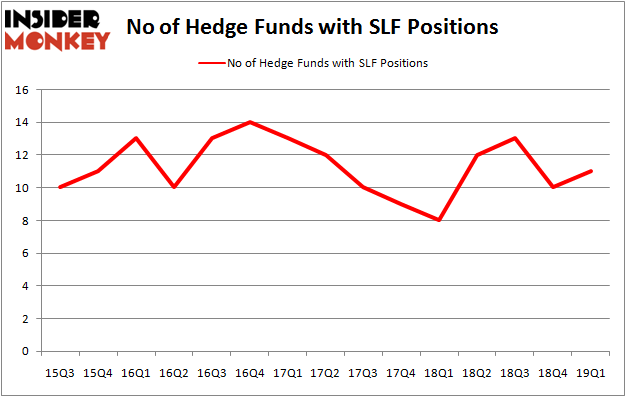 The largest stake in Sun Life Financial Inc. (NYSE:SLF) was held by Two Sigma Advisors, which reported holding $29.4 million worth of stock at the end of March. It was followed by AQR Capital Management with a $25.7 million position. Other investors bullish on the company included GLG Partners, Renaissance Technologies, and Bridgewater Associates.

As you can see these stocks had an average of 27.5 hedge funds with bullish positions and the average amount invested in these stocks was $1111 million. That figure was $103 million in SLF’s case. Palo Alto Networks Inc (NYSE:PANW) is the most popular stock in this table. On the other hand Ventas, Inc. (NYSE:VTR) is the least popular one with only 19 bullish hedge fund positions. Compared to these stocks Sun Life Financial Inc. (NYSE:SLF) is even less popular than VTR. Our calculations showed that top 20 most popular stocks among hedge funds returned 6.2% in Q2 through June 19th and outperformed the S&P 500 ETF (SPY) by nearly 3 percentage points. A small number of hedge funds were also right about betting on SLF, though not to the same extent, as the stock returned 6% during the same time frame and outperformed the market as well.