Does Studio City International Holdings Limited (NYSE:MSC) represent a good buying opportunity at the moment? Let’s quickly check the hedge fund interest towards the company. Hedge fund firms constantly search out bright intellectuals and highly-experienced employees and throw away millions of dollars on satellite photos and other research activities, so it is no wonder why they tend to generate millions in profits each year. It is also true that some hedge fund players fail inconceivably on some occasions, but net net their stock picks have been generating superior risk-adjusted returns on average over the years.

Hedge fund interest in Studio City International Holdings Limited (NYSE:MSC) shares was flat at the end of last quarter. This is usually a negative indicator. At the end of this article we will also compare MSC to other stocks including IAMGOLD Corporation (NYSE:IAG), Visteon Corp (NASDAQ:VC), and Southwestern Energy Company (NYSE:SWN) to get a better sense of its popularity. 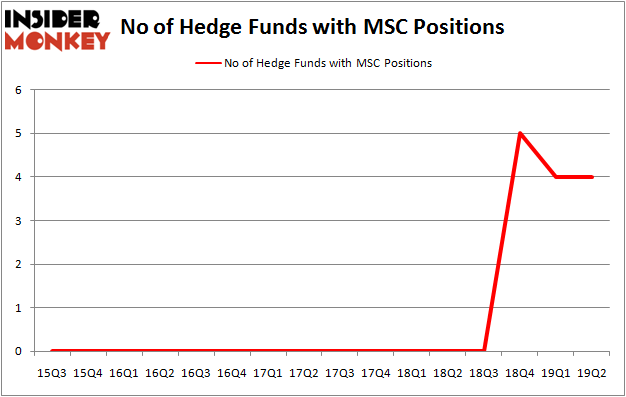 What have hedge funds been doing with Studio City International Holdings Limited (NYSE:MSC)?

At Q2’s end, a total of 4 of the hedge funds tracked by Insider Monkey were bullish on this stock, a change of 0% from one quarter earlier. By comparison, 0 hedge funds held shares or bullish call options in MSC a year ago. With hedgies’ positions undergoing their usual ebb and flow, there exists a few notable hedge fund managers who were increasing their holdings significantly (or already accumulated large positions).

We view hedge fund activity in the stock unfavorable, but in this case there was only a single hedge fund selling its entire position: Springbok Capital. One hedge fund selling its entire position doesn’t always imply a bearish intent. Theoretically a hedge fund may decide to sell a promising position in order to invest the proceeds in a more promising idea. However, we don’t think this is the case in this case because only one of the 800+ hedge funds tracked by Insider Monkey identified as a viable investment and initiated a position in the stock (that fund was Serengeti Asset Management).

As you can see these stocks had an average of 14.25 hedge funds with bullish positions and the average amount invested in these stocks was $175 million. That figure was $238 million in MSC’s case. Southwestern Energy Company (NYSE:SWN) is the most popular stock in this table. On the other hand FBL Financial Group, Inc. (NYSE:FFG) is the least popular one with only 7 bullish hedge fund positions. Compared to these stocks Studio City International Holdings Limited (NYSE:MSC) is even less popular than FFG. Hedge funds dodged a bullet by taking a bearish stance towards MSC. Our calculations showed that the top 20 most popular hedge fund stocks returned 24.4% in 2019 through September 30th and outperformed the S&P 500 ETF (SPY) by 4 percentage points. Unfortunately MSC wasn’t nearly as popular as these 20 stocks (hedge fund sentiment was very bearish); MSC investors were disappointed as the stock returned 1.4% during the third quarter and underperformed the market. If you are interested in investing in large cap stocks with huge upside potential, you should check out the top 20 most popular stocks among hedge funds as many of these stocks already outperformed the market so far in 2019.

Were Hedge Funds Right About Dumping Navient Corporation (NAVI)?
Monthly Newsletter Strategy
Download a free copy of our newsletter and see the details inside!
Hedge Fund Resource Center
Related News
11 Largest Auto Insurance Companies In The US In 2019 10 Poorest Cities in America in 2019 8 Lowest Tar and Nicotine Cigarette Brands in 2019
Billionaire Hedge Funds