Before we spend days researching a stock idea we’d like to take a look at how hedge funds and billionaire investors recently traded that stock. S&P 500 Index ETF (SPY) lost 13.5% in the fourth quarter. Seven out of 11 industry groups in the S&P 500 Index were down more than 20% from their 52-week highs at the trough of the stock market crash. The average return of a randomly picked stock in the index was even worse. This means you (or a monkey throwing a dart) have less than an even chance of beating the market by randomly picking a stock. On the other hand, the top 15 most popular S&P 500 stocks among hedge funds not only recouped their Q4 losses but also outperformed the index by more than 3 percentage points. In this article, we will take a look at what hedge funds think about Steven Madden, Ltd. (NASDAQ:SHOO).

Steven Madden, Ltd. (NASDAQ:SHOO) was in 18 hedge funds’ portfolios at the end of the fourth quarter of 2018. SHOO investors should pay attention to an increase in support from the world’s most elite money managers lately. There were 15 hedge funds in our database with SHOO holdings at the end of the previous quarter. Our calculations also showed that shoo isn’t among the 30 most popular stocks among hedge funds.

At the end of the fourth quarter, a total of 18 of the hedge funds tracked by Insider Monkey were bullish on this stock, a change of 20% from one quarter earlier. The graph below displays the number of hedge funds with bullish position in SHOO over the last 14 quarters. With hedgies’ capital changing hands, there exists a select group of noteworthy hedge fund managers who were adding to their stakes considerably (or already accumulated large positions). 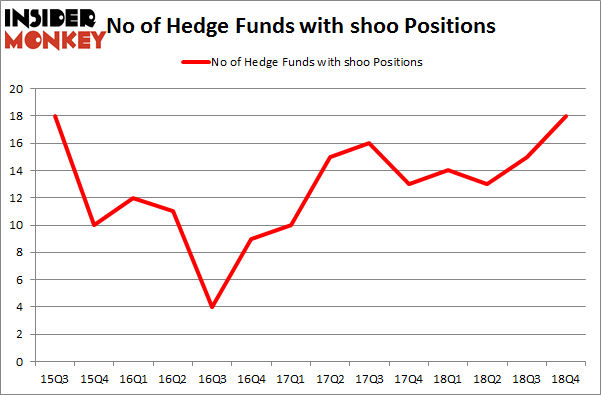 Of the funds tracked by Insider Monkey, Renaissance Technologies, managed by Jim Simons, holds the largest position in Steven Madden, Ltd. (NASDAQ:SHOO). Renaissance Technologies has a $14.1 million position in the stock, comprising less than 0.1%% of its 13F portfolio. The second largest stake is held by Winton Capital Management, led by David Harding, holding a $9.5 million position; the fund has 0.2% of its 13F portfolio invested in the stock. Other members of the smart money that hold long positions contain D. E. Shaw’s D E Shaw, Israel Englander’s Millennium Management and Cliff Asness’s AQR Capital Management.

Now, specific money managers were leading the bulls’ herd. Renaissance Technologies, managed by Jim Simons, initiated the most valuable position in Steven Madden, Ltd. (NASDAQ:SHOO). Renaissance Technologies had $14.1 million invested in the company at the end of the quarter. Lee Ainslie’s Maverick Capital also made a $4 million investment in the stock during the quarter. The following funds were also among the new SHOO investors: Benjamin A. Smith’s Laurion Capital Management, Joel Greenblatt’s Gotham Asset Management, and Thomas Bailard’s Bailard Inc.

Let’s check out hedge fund activity in other stocks – not necessarily in the same industry as Steven Madden, Ltd. (NASDAQ:SHOO) but similarly valued. We will take a look at Cyberark Software Ltd (NASDAQ:CYBR), Exponent, Inc. (NASDAQ:EXPO), Core Laboratories N.V. (NYSE:CLB), and Liberty Latin America Ltd. (NASDAQ:LILAK). All of these stocks’ market caps are similar to SHOO’s market cap.

As you can see these stocks had an average of 17.5 hedge funds with bullish positions and the average amount invested in these stocks was $232 million. That figure was $64 million in SHOO’s case. Cyberark Software Ltd (NASDAQ:CYBR) is the most popular stock in this table. On the other hand Core Laboratories N.V. (NYSE:CLB) is the least popular one with only 15 bullish hedge fund positions. Steven Madden, Ltd. (NASDAQ:SHOO) is not the most popular stock in this group but hedge fund interest is still above average. This is a slightly positive signal but we’d rather spend our time researching stocks that hedge funds are piling on. Our calculations showed that top 15 most popular stocks) among hedge funds returned 24.2% through April 22nd and outperformed the S&P 500 ETF (SPY) by more than 7 percentage points. Unfortunately SHOO wasn’t nearly as popular as these 15 stock and hedge funds that were betting on SHOO were disappointed as the stock returned 8.1% and underperformed the market. If you are interested in investing in large cap stocks with huge upside potential, you should check out the top 15 most popular stocks) among hedge funds as 13 of these stocks already outperformed the market this year.