Legendary investors such as Jeffrey Talpins and Seth Klarman earn enormous amounts of money for themselves and their investors by doing in-depth research on small-cap stocks that big brokerage houses don’t publish. Small cap stocks -especially when they are screened well- can generate substantial outperformance versus a boring index fund. That’s why we analyze the activity of those elite funds in these small-cap stocks. In the following paragraphs, we analyze SPS Commerce, Inc. (NASDAQ:SPSC) from the perspective of those elite funds.

Hedge fund interest in SPS Commerce, Inc. (NASDAQ:SPSC) shares was flat at the end of last quarter. This is usually a negative indicator. At the end of this article we will also compare SPSC to other stocks including SSR Mining Inc. (NASDAQ:SSRM), Callaway Golf Company (NYSE:ELY), and Insight Enterprises, Inc. (NASDAQ:NSIT) to get a better sense of its popularity. 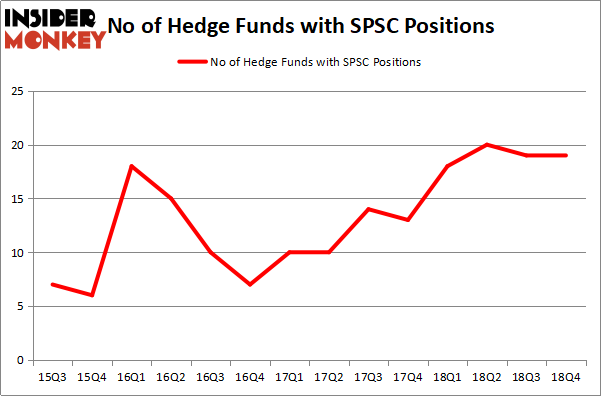 More specifically, Renaissance Technologies was the largest shareholder of SPS Commerce, Inc. (NASDAQ:SPSC), with a stake worth $36.4 million reported as of the end of December. Trailing Renaissance Technologies was D E Shaw, which amassed a stake valued at $19.5 million. Millennium Management, AQR Capital Management, and Two Sigma Advisors were also very fond of the stock, giving the stock large weights in their portfolios.

Judging by the fact that SPS Commerce, Inc. (NASDAQ:SPSC) has experienced falling interest from hedge fund managers, it’s safe to say that there exists a select few hedge funds that decided to sell off their entire stakes in the third quarter. It’s worth mentioning that Greg Poole’s Echo Street Capital Management cut the largest stake of the “upper crust” of funds watched by Insider Monkey, worth about $8.9 million in stock, and Richard Driehaus’s Driehaus Capital was right behind this move, as the fund cut about $0.8 million worth. These transactions are intriguing to say the least, as aggregate hedge fund interest stayed the same (this is a bearish signal in our experience).

As you can see these stocks had an average of 20 hedge funds with bullish positions and the average amount invested in these stocks was $104 million. That figure was $148 million in SPSC’s case. World Fuel Services Corporation (NYSE:INT) is the most popular stock in this table. On the other hand SSR Mining Inc. (NASDAQ:SSRM) is the least popular one with only 12 bullish hedge fund positions. SPS Commerce, Inc. (NASDAQ:SPSC) is not the least popular stock in this group but hedge fund interest is still below average. Our calculations showed that top 15 most popular stocks) among hedge funds returned 24.2% through April 22nd and outperformed the S&P 500 ETF (SPY) by more than 7 percentage points. A small number of hedge funds were also right about betting on SPSC, though not to the same extent, as the stock returned 24.1% and outperformed the market as well.