South Jersey Industries Inc (NYSE:SJI) investors should be aware of a decrease in hedge fund interest lately. Our calculations also showed that SJI isn’t among the 30 most popular stocks among hedge funds.

What have hedge funds been doing with South Jersey Industries Inc (NYSE:SJI)?

At the end of the fourth quarter, a total of 12 of the hedge funds tracked by Insider Monkey were long this stock, a change of -14% from the previous quarter. By comparison, 6 hedge funds held shares or bullish call options in SJI a year ago. With the smart money’s capital changing hands, there exists a select group of notable hedge fund managers who were boosting their stakes significantly (or already accumulated large positions). 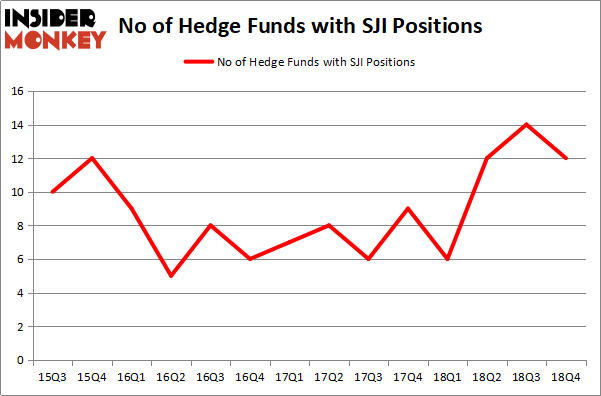 According to Insider Monkey’s hedge fund database, Jim Simons’s Renaissance Technologies has the largest position in South Jersey Industries Inc (NYSE:SJI), worth close to $21.9 million, comprising less than 0.1%% of its total 13F portfolio. The second largest stake is held by D E Shaw, led by D. E. Shaw, holding a $13.2 million position; less than 0.1%% of its 13F portfolio is allocated to the company. Other peers that are bullish encompass Frederick DiSanto’s Ancora Advisors, Jonathan Barrett and Paul Segal’s Luminus Management and Michael Gelband’s ExodusPoint Capital.

Because South Jersey Industries Inc (NYSE:SJI) has experienced a decline in interest from the entirety of the hedge funds we track, we can see that there lies a certain “tier” of hedgies that elected to cut their entire stakes by the end of the third quarter. Interestingly, Brian Olson, Baehyun Sung, and Jamie Waters’s Blackstart Capital dumped the largest investment of all the hedgies followed by Insider Monkey, totaling an estimated $8.2 million in stock, and Sara Nainzadeh’s Centenus Global Management was right behind this move, as the fund dropped about $7.6 million worth. These moves are important to note, as aggregate hedge fund interest was cut by 2 funds by the end of the third quarter.

As you can see these stocks had an average of 15.5 hedge funds with bullish positions and the average amount invested in these stocks was $202 million. That figure was $70 million in SJI’s case. Blueprint Medicines Corporation (NASDAQ:BPMC) is the most popular stock in this table. On the other hand FirstService Corporation (TSE:FSV) is the least popular one with only 13 bullish hedge fund positions. Compared to these stocks South Jersey Industries Inc (NYSE:SJI) is even less popular than FSV. Hedge funds dodged a bullet by taking a bearish stance towards SJI. Our calculations showed that the top 15 most popular hedge fund stocks returned 24.2% through April 22nd and outperformed the S&P 500 ETF (SPY) by more than 7 percentage points. Unfortunately SJI wasn’t nearly as popular as these 15 stock (hedge fund sentiment was very bearish); SJI investors were disappointed as the stock returned 13.5% and underperformed the market. If you are interested in investing in large cap stocks with huge upside potential, you should check out the top 15 most popular stocks) among hedge funds as 13 of these stocks already outperformed the market this year.