Is Sleep Number Corporation (NASDAQ:SNBR) undervalued? The smart money is betting on the stock. The number of long hedge fund positions rose by 4 in recent months. Our calculations also showed that SNBR isn’t among the 30 most popular stocks among hedge funds. SNBR was in 18 hedge funds’ portfolios at the end of the fourth quarter of 2018. There were 14 hedge funds in our database with SNBR positions at the end of the previous quarter.

What does the smart money think about Sleep Number Corporation (NASDAQ:SNBR)?

At Q4’s end, a total of 18 of the hedge funds tracked by Insider Monkey held long positions in this stock, a change of 29% from one quarter earlier. On the other hand, there were a total of 16 hedge funds with a bullish position in SNBR a year ago. With hedge funds’ positions undergoing their usual ebb and flow, there exists a few notable hedge fund managers who were adding to their holdings considerably (or already accumulated large positions). 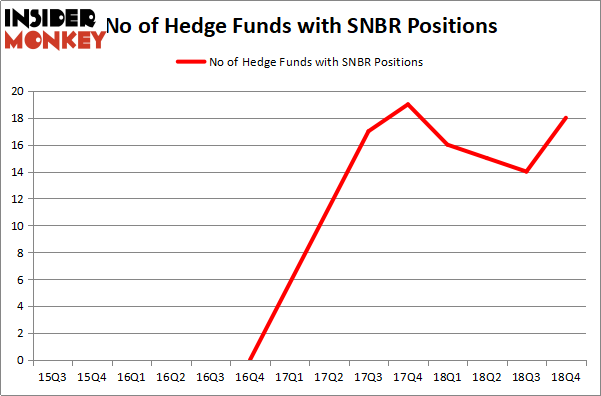 More specifically, D E Shaw was the largest shareholder of Sleep Number Corporation (NASDAQ:SNBR), with a stake worth $23.5 million reported as of the end of December. Trailing D E Shaw was GLG Partners, which amassed a stake valued at $15 million. Winton Capital Management, Millennium Management, and Balyasny Asset Management were also very fond of the stock, giving the stock large weights in their portfolios.

Consequently, key money managers have been driving this bullishness. Winton Capital Management, managed by David Harding, established the largest position in Sleep Number Corporation (NASDAQ:SNBR). Winton Capital Management had $10.5 million invested in the company at the end of the quarter. Paul Tudor Jones’s Tudor Investment Corp also made a $2.5 million investment in the stock during the quarter. The other funds with new positions in the stock are Jim Simons’s Renaissance Technologies, Peter Algert and Kevin Coldiron’s Algert Coldiron Investors, and Andrew Feldstein and Stephen Siderow’s Blue Mountain Capital.

As you can see these stocks had an average of 12 hedge funds with bullish positions and the average amount invested in these stocks was $66 million. That figure was $76 million in SNBR’s case. AZZ Incorporated (NYSE:AZZ) is the most popular stock in this table. On the other hand Installed Building Products Inc (NYSE:IBP) is the least popular one with only 8 bullish hedge fund positions. Compared to these stocks Sleep Number Corporation (NASDAQ:SNBR) is more popular among hedge funds. Our calculations showed that top 15 most popular stocks) among hedge funds returned 24.2% through April 22nd and outperformed the S&P 500 ETF (SPY) by more than 7 percentage points. Unfortunately SNBR wasn’t nearly as popular as these 15 stock and hedge funds that were betting on SNBR were disappointed as the stock returned 15.1% and underperformed the market. If you are interested in investing in large cap stocks with huge upside potential, you should check out the top 15 most popular stocks) among hedge funds as 13 of these stocks already outperformed the market this year.