Like everyone else, elite investors make mistakes. Some of their top consensus picks, such as Amazon, Facebook and Alibaba, have not done well in Q4 due to various reasons. Nevertheless, the data show elite investors’ consensus picks have done well on average over the long-term. The top 15 S&P 500 stocks among hedge funds at the end of September 2018 returned an average of 1% through March 15th whereas the S&P 500 Index ETF lost 2.2% during the same period. Because their consensus picks have done well, we pay attention to what elite funds think before doing extensive research on a stock. In this article, we take a closer look at SJW Group (NYSE:SJW) from the perspective of those elite funds.

SJW Group (NYSE:SJW) investors should pay attention to an increase in enthusiasm from smart money lately. Our calculations also showed that SJW isn’t among the 30 most popular stocks among hedge funds.

What does the smart money think about SJW Group (NYSE:SJW)? 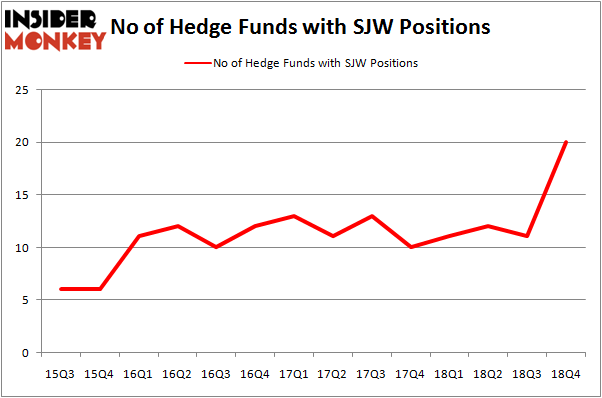 Among these funds, Renaissance Technologies held the most valuable stake in SJW Group (NYSE:SJW), which was worth $42.5 million at the end of the fourth quarter. On the second spot was Point72 Asset Management which amassed $25.9 million worth of shares. Moreover, Royce & Associates, Blackstart Capital, and Shelter Harbor Advisors were also bullish on SJW Group (NYSE:SJW), allocating a large percentage of their portfolios to this stock.