A market correction in the fourth quarter, spurred by a number of global macroeconomic concerns and rising interest rates ended up having a negative impact on the markets and many hedge funds as a result. The stocks of smaller companies were especially hard hit during this time as investors fled to investments seen as being safer. This is evident in the fact that the Russell 2000 ETF underperformed the S&P 500 ETF by nearly 7 percentage points during the fourth quarter. We also received indications that hedge funds were trimming their positions amid the market volatility and uncertainty, and given their greater inclination towards smaller cap stocks than other investors, it follows that a stronger sell-off occurred in those stocks. Let’s study the hedge fund sentiment to see how those concerns affected their ownership of Simmons First National Corporation (NASDAQ:SFNC) during the quarter.

Simmons First National Corporation (NASDAQ:SFNC) was in 7 hedge funds’ portfolios at the end of December. SFNC investors should be aware of a decrease in hedge fund interest lately. There were 9 hedge funds in our database with SFNC holdings at the end of the previous quarter. Our calculations also showed that SFNC isn’t among the 30 most popular stocks among hedge funds.

At Q4’s end, a total of 7 of the hedge funds tracked by Insider Monkey were bullish on this stock, a change of -22% from one quarter earlier. Below, you can check out the change in hedge fund sentiment towards SFNC over the last 14 quarters. With the smart money’s sentiment swirling, there exists a few key hedge fund managers who were increasing their holdings substantially (or already accumulated large positions). 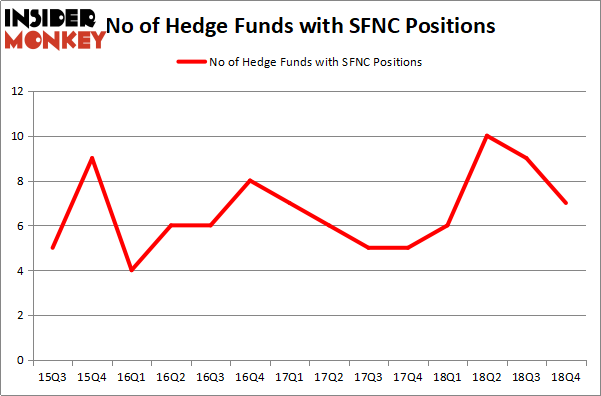 When looking at the institutional investors followed by Insider Monkey, Winton Capital Management, managed by David Harding, holds the number one position in Simmons First National Corporation (NASDAQ:SFNC). Winton Capital Management has a $9.2 million position in the stock, comprising 0.2% of its 13F portfolio. The second most bullish fund manager is Renaissance Technologies, managed by Jim Simons, which holds a $1.2 million position; less than 0.1%% of its 13F portfolio is allocated to the company. Other peers that hold long positions contain Ken Griffin’s Citadel Investment Group, Dmitry Balyasny’s Balyasny Asset Management and Cliff Asness’s AQR Capital Management.

Due to the fact that Simmons First National Corporation (NASDAQ:SFNC) has witnessed a decline in interest from hedge fund managers, it’s safe to say that there exists a select few funds that slashed their entire stakes heading into Q3. Interestingly, Peter Rathjens, Bruce Clarke and John Campbell’s Arrowstreet Capital sold off the largest investment of the 700 funds followed by Insider Monkey, worth about $1.2 million in stock. Noam Gottesman’s fund, GLG Partners, also dropped its stock, about $1 million worth. These bearish behaviors are intriguing to say the least, as aggregate hedge fund interest was cut by 2 funds heading into Q3.

As you can see these stocks had an average of 12.5 hedge funds with bullish positions and the average amount invested in these stocks was $90 million. That figure was $12 million in SFNC’s case. Tenneco Inc (NYSE:TEN) is the most popular stock in this table. On the other hand 360 Finance, Inc. (NASDAQ:QFIN) is the least popular one with only 2 bullish hedge fund positions. Simmons First National Corporation (NASDAQ:SFNC) is not the least popular stock in this group but hedge fund interest is still below average. This is a slightly negative signal and we’d rather spend our time researching stocks that hedge funds are piling on. Our calculations showed that top 15 most popular stocks) among hedge funds returned 24.2% through April 22nd and outperformed the S&P 500 ETF (SPY) by more than 7 percentage points. Unfortunately SFNC wasn’t nearly as popular as these 15 stock (hedge fund sentiment was quite bearish); SFNC investors were disappointed as the stock returned 3.6% and underperformed the market. If you are interested in investing in large cap stocks with huge upside potential, you should check out the top 15 most popular stocks) among hedge funds as 13 of these stocks already outperformed the market this year.