Shaw Communications Inc (NYSE:SJR) investors should pay attention to a decrease in enthusiasm from smart money recently. Our calculations also showed that SJR isn’t among the 30 most popular stocks among hedge funds.

How have hedgies been trading Shaw Communications Inc (NYSE:SJR)?

Heading into the first quarter of 2019, a total of 14 of the hedge funds tracked by Insider Monkey were bullish on this stock, a change of -13% from one quarter earlier. By comparison, 12 hedge funds held shares or bullish call options in SJR a year ago. With hedge funds’ positions undergoing their usual ebb and flow, there exists a select group of notable hedge fund managers who were upping their stakes substantially (or already accumulated large positions). 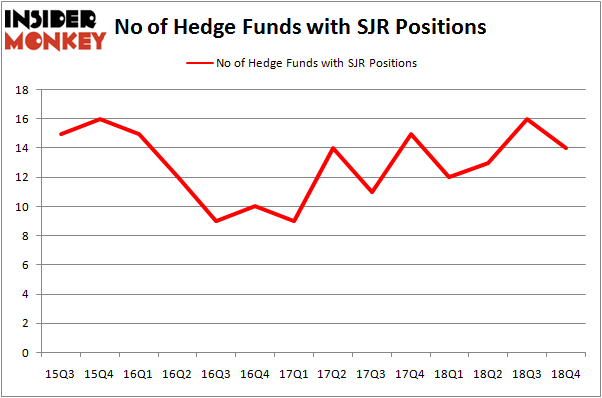 Since Shaw Communications Inc (NYSE:SJR) has experienced declining sentiment from hedge fund managers, it’s safe to say that there were a few money managers that decided to sell off their full holdings last quarter. Intriguingly, Peter Rathjens, Bruce Clarke and John Campbell’s Arrowstreet Capital cut the biggest investment of the 700 funds watched by Insider Monkey, totaling about $3.6 million in stock. J. Alan Reid, Jr.’s fund, Forward Management, also dropped its stock, about $1.1 million worth. These moves are intriguing to say the least, as total hedge fund interest dropped by 2 funds last quarter.

As you can see these stocks had an average of 25.75 hedge funds with bullish positions and the average amount invested in these stocks was $686 million. That figure was $204 million in SJR’s case. Qurate Retail, Inc. (NASDAQ:QRTEA) is the most popular stock in this table. On the other hand Open Text Corporation (NASDAQ:OTEX) is the least popular one with only 20 bullish hedge fund positions. Compared to these stocks Shaw Communications Inc (NYSE:SJR) is even less popular than OTEX. Our calculations showed that top 15 most popular stocks among hedge funds returned 19.7% through March 15th and outperformed the S&P 500 ETF (SPY) by 6.6 percentage points. A few hedge funds were also right about betting on SJR, though not to the same extent, as the stock returned 16.3% and outperformed the market as well.