Insider Monkey finished processing more than 700 13F filings submitted by hedge funds and prominent investors. These filings show these funds’ portfolio positions as of December 31st, 2018. What do these smart investors think about Seacoast Banking Corporation of Florida (NASDAQ:SBCF)?

Is Seacoast Banking Corporation of Florida (NASDAQ:SBCF) a good stock to buy now? Investors who are in the know are selling. The number of bullish hedge fund bets fell by 3 lately. Our calculations also showed that SBCF isn’t among the 30 most popular stocks among hedge funds.

We’re going to take a glance at the new hedge fund action regarding Seacoast Banking Corporation of Florida (NASDAQ:SBCF).

How have hedgies been trading Seacoast Banking Corporation of Florida (NASDAQ:SBCF)?

Heading into the first quarter of 2019, a total of 6 of the hedge funds tracked by Insider Monkey were bullish on this stock, a change of -33% from the previous quarter. By comparison, 14 hedge funds held shares or bullish call options in SBCF a year ago. With hedge funds’ positions undergoing their usual ebb and flow, there exists an “upper tier” of noteworthy hedge fund managers who were boosting their holdings substantially (or already accumulated large positions). 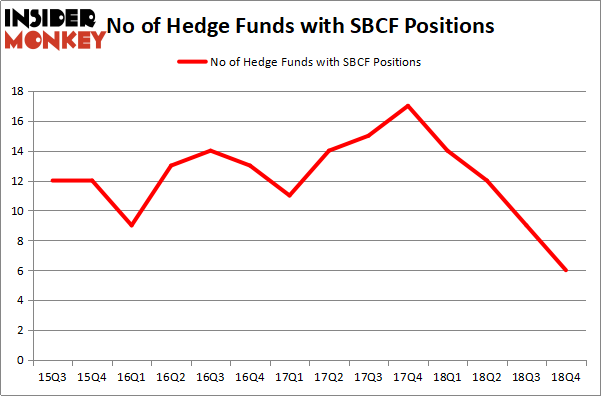 More specifically, Mendon Capital Advisors was the largest shareholder of Seacoast Banking Corporation of Florida (NASDAQ:SBCF), with a stake worth $15.1 million reported as of the end of December. Trailing Mendon Capital Advisors was Millennium Management, which amassed a stake valued at $14.3 million. Royce & Associates, Basswood Capital, and GAMCO Investors were also very fond of the stock, giving the stock large weights in their portfolios.

Since Seacoast Banking Corporation of Florida (NASDAQ:SBCF) has witnessed a decline in interest from the entirety of the hedge funds we track, we can see that there lies a certain “tier” of hedgies that slashed their entire stakes in the third quarter. It’s worth mentioning that Ravi Chopra’s Azora Capital said goodbye to the biggest stake of the 700 funds tracked by Insider Monkey, comprising close to $4.3 million in stock, and Peter Muller’s PDT Partners was right behind this move, as the fund sold off about $1 million worth. These moves are interesting, as total hedge fund interest was cut by 3 funds in the third quarter.

As you can see these stocks had an average of 10 hedge funds with bullish positions and the average amount invested in these stocks was $54 million. That figure was $45 million in SBCF’s case. GasLog Ltd (NYSE:GLOG) is the most popular stock in this table. On the other hand OSI Systems, Inc. (NASDAQ:OSIS) is the least popular one with only 5 bullish hedge fund positions. Seacoast Banking Corporation of Florida (NASDAQ:SBCF) is not the least popular stock in this group but hedge fund interest is still below average. This is a slightly negative signal and we’d rather spend our time researching stocks that hedge funds are piling on. Our calculations showed that top 15 most popular stocks) among hedge funds returned 24.2% through April 22nd and outperformed the S&P 500 ETF (SPY) by more than 7 percentage points. Unfortunately SBCF wasn’t nearly as popular as these 15 stock (hedge fund sentiment was quite bearish); SBCF investors were disappointed as the stock returned 5.2% and underperformed the market. If you are interested in investing in large cap stocks with huge upside potential, you should check out the top 15 most popular stocks) among hedge funds as 13 of these stocks already outperformed the market this year.