As we already know from media reports and hedge fund investor letters, many hedge funds lost money in fourth quarter, blaming macroeconomic conditions and unpredictable events that hit several sectors, with technology among them. Nevertheless, most investors decided to stick to their bullish theses and their long-term focus allows us to profit from the recent declines. In particular, let’s take a look at what hedge funds think about Science Applications International Corp (NYSE:SAIC) in this article.

Science Applications International Corp (NYSE:SAIC) shares haven’t seen a lot of action during the third quarter. Overall, hedge fund sentiment was unchanged. The stock was in 24 hedge funds’ portfolios at the end of December. The level and the change in hedge fund popularity aren’t the only variables you need to analyze to decipher hedge funds’ perspectives. A stock may witness a boost in popularity but it may still be less popular than similarly priced stocks. That’s why at the end of this article we will examine companies such as Old National Bancorp (NYSE:ONB), Corelogic Inc (NYSE:CLGX), and Akcea Therapeutics, Inc. (NASDAQ:AKCA) to gather more data points.

How have hedgies been trading Science Applications International Corp (NYSE:SAIC)?

Heading into the first quarter of 2019, a total of 24 of the hedge funds tracked by Insider Monkey were bullish on this stock, a change of 0% from one quarter earlier. On the other hand, there were a total of 17 hedge funds with a bullish position in SAIC a year ago. With hedge funds’ capital changing hands, there exists a select group of key hedge fund managers who were upping their stakes significantly (or already accumulated large positions). 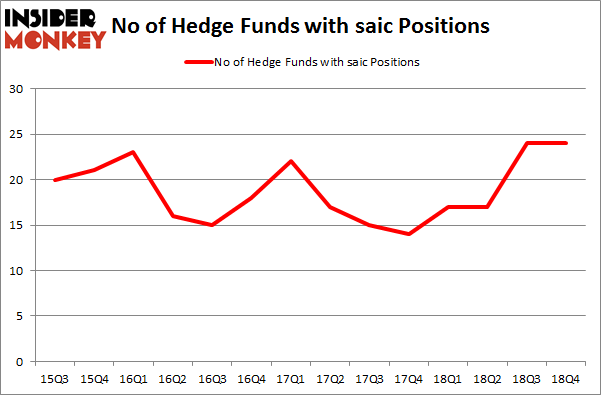 According to publicly available hedge fund and institutional investor holdings data compiled by Insider Monkey, Cliff Asness’s AQR Capital Management has the largest position in Science Applications International Corp (NYSE:SAIC), worth close to $38.8 million, amounting to less than 0.1%% of its total 13F portfolio. The second largest stake is held by Matt Simon (Citadel) of Ashler Capital, with a $38.5 million position; the fund has 2.9% of its 13F portfolio invested in the stock. Other hedge funds and institutional investors that are bullish include Richard Barrera’s Roystone Capital Partners, Phill Gross and Robert Atchinson’s Adage Capital Management and Murray Stahl’s Horizon Asset Management.

Since Science Applications International Corp (NYSE:SAIC) has experienced bearish sentiment from the smart money, logic holds that there is a sect of hedge funds who sold off their positions entirely last quarter. Interestingly, Steve Pigott’s Fort Baker Capital Management dropped the largest position of the 700 funds tracked by Insider Monkey, valued at an estimated $5.7 million in stock. Matthew Hulsizer’s fund, PEAK6 Capital Management, also said goodbye to its stock, about $2.8 million worth. These moves are interesting, as total hedge fund interest stayed the same (this is a bearish signal in our experience).

As you can see these stocks had an average of 12.25 hedge funds with bullish positions and the average amount invested in these stocks was $107 million. That figure was $192 million in SAIC’s case. Corelogic Inc (NYSE:CLGX) is the most popular stock in this table. On the other hand Akcea Therapeutics, Inc. (NASDAQ:AKCA) is the least popular one with only 6 bullish hedge fund positions. Compared to these stocks Science Applications International Corp (NYSE:SAIC) is more popular among hedge funds. Our calculations showed that top 15 most popular stocks) among hedge funds returned 24.2% through April 22nd and outperformed the S&P 500 ETF (SPY) by more than 7 percentage points. Hedge funds were also right about betting on SAIC, though not to the same extent, as the stock returned 16.7% and outperformed the market as well.