We are still in an overall bull market and many stocks that smart money investors were piling into surged through October 17th. Among them, Facebook and Microsoft ranked among the top 3 picks and these stocks gained 45% and 39% respectively. Hedge funds’ top 3 stock picks returned 34.4% this year and beat the S&P 500 ETFs by 13 percentage points. Investing in index funds guarantees you average returns, not superior returns. We are looking to generate superior returns for our readers. That’s why we believe it isn’t a waste of time to check out hedge fund sentiment before you invest in a stock like Scholastic Corporation (NASDAQ:SCHL).

Is Scholastic Corporation (NASDAQ:SCHL) worth your attention right now? Money managers are becoming more confident. The number of long hedge fund positions moved up by 4 recently. Our calculations also showed that SCHL isn’t among the 30 most popular stocks among hedge funds (see the video below). SCHL was in 14 hedge funds’ portfolios at the end of June. There were 10 hedge funds in our database with SCHL positions at the end of the previous quarter.

To the average investor there are tons of signals investors use to analyze their stock investments. A pair of the most under-the-radar signals are hedge fund and insider trading interest. Our experts have shown that, historically, those who follow the top picks of the best money managers can trounce the broader indices by a superb margin (see the details here).

Unlike former hedge manager, Dr. Steve Sjuggerud, who is convinced Dow will soar past 40000, our long-short investment strategy doesn’t rely on bull markets to deliver double digit returns. We only rely on hedge fund buy/sell signals. Let’s take a look at the key hedge fund action regarding Scholastic Corporation (NASDAQ:SCHL).

Heading into the third quarter of 2019, a total of 14 of the hedge funds tracked by Insider Monkey were bullish on this stock, a change of 40% from one quarter earlier. By comparison, 9 hedge funds held shares or bullish call options in SCHL a year ago. With the smart money’s sentiment swirling, there exists an “upper tier” of key hedge fund managers who were adding to their holdings meaningfully (or already accumulated large positions). 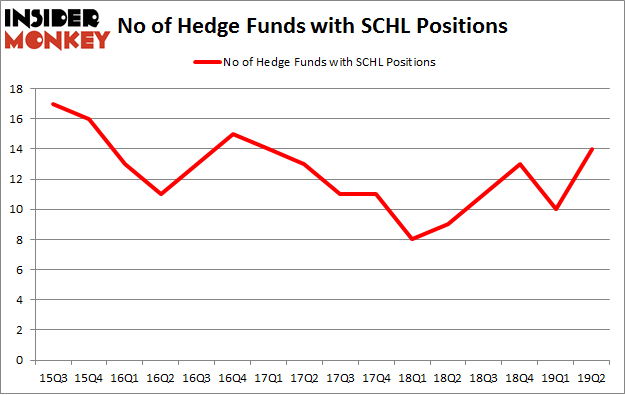 According to publicly available hedge fund and institutional investor holdings data compiled by Insider Monkey, Royce & Associates, managed by Chuck Royce, holds the largest position in Scholastic Corporation (NASDAQ:SCHL). Royce & Associates has a $60.3 million position in the stock, comprising 0.5% of its 13F portfolio. Sitting at the No. 2 spot is Citadel Investment Group, led by Ken Griffin, holding a $3.1 million position; less than 0.1%% of its 13F portfolio is allocated to the stock. Some other professional money managers that hold long positions consist of D. E. Shaw’s D E Shaw, Israel Englander’s Millennium Management and John Overdeck and David Siegel’s Two Sigma Advisors.

Let’s now take a look at hedge fund activity in other stocks – not necessarily in the same industry as Scholastic Corporation (NASDAQ:SCHL) but similarly valued. We will take a look at Five Point Holdings, LLC (NYSE:FPH), Talend S.A. (NASDAQ:TLND), Apogee Enterprises, Inc. (NASDAQ:APOG), and Compass Diversified Holdings LLC (NYSE:CODI). All of these stocks’ market caps are closest to SCHL’s market cap.

As you can see these stocks had an average of 13.75 hedge funds with bullish positions and the average amount invested in these stocks was $187 million. That figure was $71 million in SCHL’s case. Talend S.A. (NASDAQ:TLND) is the most popular stock in this table. On the other hand Compass Diversified Holdings LLC (NYSE:CODI) is the least popular one with only 5 bullish hedge fund positions. Scholastic Corporation (NASDAQ:SCHL) is not the most popular stock in this group but hedge fund interest is still above average. Our calculations showed that top 20 most popular stocks among hedge funds returned 24.4% in 2019 through September 30th and outperformed the S&P 500 ETF (SPY) by 4 percentage points. Hedge funds were also right about betting on SCHL as the stock returned 14.1% during the third quarter and outperformed the market. Hedge funds were rewarded for their relative bullishness.