While the market driven by short-term sentiment influenced by uncertainty regarding the future of the interest rate environment in the US, declining oil prices and the trade war with China, many smart money investors kept their optimism regarding the current bull run in the fourth quarter, while still hedging many of their long positions. However, as we know, big investors usually buy stocks with strong fundamentals, which is why we believe we can profit from imitating them. In this article, we are going to take a look at the smart money sentiment surrounding Saia Inc (NASDAQ:SAIA).

Saia Inc (NASDAQ:SAIA) has experienced an increase in enthusiasm from smart money of late. Our calculations also showed that SAIA isn’t among the 30 most popular stocks among hedge funds. 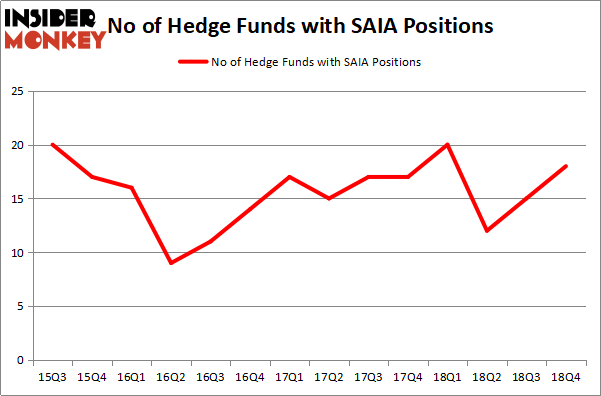 The largest stake in Saia Inc (NASDAQ:SAIA) was held by Royce & Associates, which reported holding $13 million worth of stock at the end of December. It was followed by D E Shaw with a $7.5 million position. Other investors bullish on the company included Millennium Management, Marshall Wace LLP, and GLG Partners.

Now, key money managers were breaking ground themselves. Marshall Wace LLP, managed by Paul Marshall and Ian Wace, established the largest position in Saia Inc (NASDAQ:SAIA). Marshall Wace LLP had $4.1 million invested in the company at the end of the quarter. Jim Simons’s Renaissance Technologies also made a $2.4 million investment in the stock during the quarter. The other funds with new positions in the stock are Joel Greenblatt’s Gotham Asset Management, Hoon Kim’s Quantinno Capital, and Andrew Feldstein and Stephen Siderow’s Blue Mountain Capital.

As you can see these stocks had an average of 12 hedge funds with bullish positions and the average amount invested in these stocks was $101 million. That figure was $48 million in SAIA’s case. Hostess Brands, Inc. (NASDAQ:TWNK) is the most popular stock in this table. On the other hand Uxin Limited (NASDAQ:UXIN) is the least popular one with only 6 bullish hedge fund positions. Saia Inc (NASDAQ:SAIA) is not the most popular stock in this group but hedge fund interest is still above average. Our calculations showed that top 15 most popular stocks) among hedge funds returned 24.2% through April 22nd and outperformed the S&P 500 ETF (SPY) by more than 7 percentage points. Hedge funds were also right about betting on SAIA, though not to the same extent, as the stock returned 22.8% and outperformed the market as well.