Like everyone else, elite investors make mistakes. Some of their top consensus picks, such as Amazon, Facebook and Alibaba, have not done well in Q4 due to various reasons. Nevertheless, the data show elite investors’ consensus picks have done well on average over the long-term. The top 15 S&P 500 stocks among hedge funds at the end of September 2018 returned an average of 1% through March 15th whereas the S&P 500 Index ETF lost 2.2% during the same period. Because their consensus picks have done well, we pay attention to what elite funds think before doing extensive research on a stock. In this article, we take a closer look at Sabre Corporation (NASDAQ:SABR) from the perspective of those elite funds.

Is Sabre Corporation (NASDAQ:SABR) the right investment to pursue these days? The smart money is in a bearish mood. The number of long hedge fund bets retreated by 7 in recent months. Our calculations also showed that SABR isn’t among the 30 most popular stocks among hedge funds. SABR was in 24 hedge funds’ portfolios at the end of the fourth quarter of 2018. There were 31 hedge funds in our database with SABR holdings at the end of the previous quarter.

Heading into the first quarter of 2019, a total of 24 of the hedge funds tracked by Insider Monkey were long this stock, a change of -23% from one quarter earlier. Below, you can check out the change in hedge fund sentiment towards SABR over the last 14 quarters. So, let’s examine which hedge funds were among the top holders of the stock and which hedge funds were making big moves. 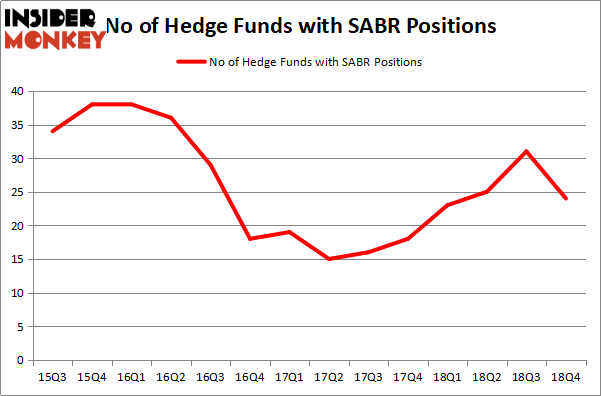 When looking at the institutional investors followed by Insider Monkey, Jeffrey Talpins’s Element Capital Management has the biggest position in Sabre Corporation (NASDAQ:SABR), worth close to $122.7 million, accounting for 3.5% of its total 13F portfolio. Sitting at the No. 2 spot is D E Shaw, managed by D. E. Shaw, which holds a $40 million position; 0.1% of its 13F portfolio is allocated to the stock. Some other members of the smart money with similar optimism consist of Martin D. Sass’s MD Sass, Israel Englander’s Millennium Management and John Overdeck and David Siegel’s Two Sigma Advisors.

Because Sabre Corporation (NASDAQ:SABR) has witnessed bearish sentiment from the entirety of the hedge funds we track, it’s safe to say that there were a few hedgies that decided to sell off their entire stakes by the end of the third quarter. At the top of the heap, Jim Davidson, Dave Roux and Glenn Hutchins’s Silver Lake Partners cut the largest stake of all the hedgies tracked by Insider Monkey, comprising about $248.5 million in call options, and Paul Singer’s Elliott Management was right behind this move, as the fund dropped about $26.1 million worth. These moves are important to note, as total hedge fund interest dropped by 7 funds by the end of the third quarter.

Let’s now review hedge fund activity in other stocks – not necessarily in the same industry as Sabre Corporation (NASDAQ:SABR) but similarly valued. These stocks are Post Holdings Inc (NYSE:POST), The Toro Company (NYSE:TTC), Cimarex Energy Co (NYSE:XEC), and AptarGroup, Inc. (NYSE:ATR). All of these stocks’ market caps are similar to SABR’s market cap.

As you can see these stocks had an average of 23.5 hedge funds with bullish positions and the average amount invested in these stocks was $738 million. That figure was $276 million in SABR’s case. Post Holdings Inc (NYSE:POST) is the most popular stock in this table. On the other hand AptarGroup, Inc. (NYSE:ATR) is the least popular one with only 17 bullish hedge fund positions. Sabre Corporation (NASDAQ:SABR) is not the most popular stock in this group but hedge fund interest is still above average. This is a slightly positive signal but we’d rather spend our time researching stocks that hedge funds are piling on. Our calculations showed that top 15 most popular stocks among hedge funds returned 21.3% through April 8th and outperformed the S&P 500 ETF (SPY) by more than 5 percentage points. Unfortunately SABR wasn’t in this group. Hedge funds that bet on SABR were disappointed as the stock returned .9% and underperformed the market. If you are interested in investing in large cap stocks, you should check out the top 15 hedge fund stocks as 12 of these outperformed the market.