The 700+ hedge funds and famous money managers tracked by Insider Monkey have already compiled and submitted their 13F filings for the first quarter, which unveil their equity positions as of March 31. We went through these filings, fixed typos and other more significant errors and identified the changes in hedge fund portfolios. Our extensive review of these public filings is finally over, so this article is set to reveal the smart money sentiment towards Restaurant Brands International Inc (NYSE:QSR).

Restaurant Brands International Inc (NYSE:QSR) shares haven’t seen a lot of action during the first quarter. Overall, hedge fund sentiment was unchanged. The stock was in 37 hedge funds’ portfolios at the end of the first quarter of 2019. At the end of this article we will also compare QSR to other stocks including Keysight Technologies Inc (NYSE:KEYS), L3 Technologies, Inc. (NYSE:LLL), and Garmin Ltd. (NASDAQ:GRMN) to get a better sense of its popularity.

What does the smart money think about Restaurant Brands International Inc (NYSE:QSR)? 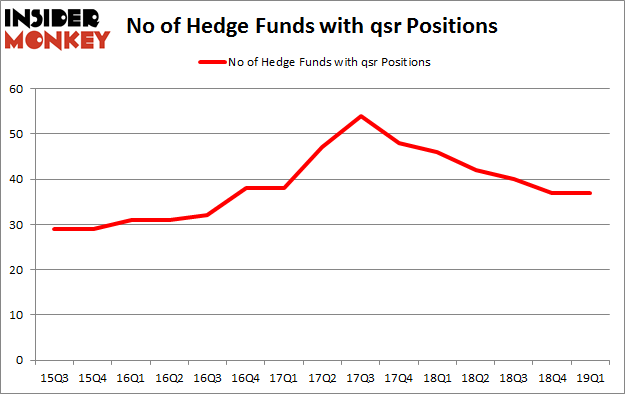 More specifically, Pershing Square was the largest shareholder of Restaurant Brands International Inc (NYSE:QSR), with a stake worth $1194.3 million reported as of the end of March. Trailing Pershing Square was Berkshire Hathaway, which amassed a stake valued at $549.4 million. Melvin Capital Management, Eminence Capital, and Suvretta Capital Management were also very fond of the stock, giving the stock large weights in their portfolios.

Judging by the fact that Restaurant Brands International Inc (NYSE:QSR) has faced falling interest from the entirety of the hedge funds we track, it’s easy to see that there was a specific group of hedgies that decided to sell off their positions entirely last quarter. At the top of the heap, Brandon Haley’s Holocene Advisors dropped the largest position of the “upper crust” of funds followed by Insider Monkey, comprising close to $48.2 million in stock. Jeff Lignelli’s fund, Incline Global Management, also dumped its stock, about $37 million worth. These transactions are important to note, as aggregate hedge fund interest stayed the same (this is a bearish signal in our experience).

As you can see these stocks had an average of 28.5 hedge funds with bullish positions and the average amount invested in these stocks was $760 million. That figure was $3609 million in QSR’s case. Keysight Technologies Inc (NYSE:KEYS) is the most popular stock in this table. On the other hand Genuine Parts Company (NYSE:GPC) is the least popular one with only 22 bullish hedge fund positions. Restaurant Brands International Inc (NYSE:QSR) is not the most popular stock in this group but hedge fund interest is still above average. Our calculations showed that top 20 most popular stocks among hedge funds returned 1.9% in Q2 through May 30th and outperformed the S&P 500 ETF (SPY) by more than 3 percentage points. Hedge funds were also right about betting on QSR, though not to the same extent, as the stock returned 0% during the same time frame and outperformed the market as well.