Does Repligen Corporation (NASDAQ:RGEN) represent a good buying opportunity at the moment? Let’s briefly check the hedge fund interest towards the company. Hedge fund firms constantly search out bright intellectuals and highly-experienced employees and throw away millions of dollars on satellite photos and other research activities, so it is no wonder why they tend to generate millions in profits each year. It is also true that some hedge fund players fail inconceivably on some occasions, but net net their stock picks have been generating superior risk-adjusted returns on average over the years.

Is Repligen Corporation (NASDAQ:RGEN) going to take off soon? The best stock pickers are turning bullish. The number of bullish hedge fund positions went up by 10 in recent months. Our calculations also showed that RGEN isn’t among the 30 most popular stocks among hedge funds.

What have hedge funds been doing with Repligen Corporation (NASDAQ:RGEN)?

At Q4’s end, a total of 22 of the hedge funds tracked by Insider Monkey were long this stock, a change of 83% from the second quarter of 2018. Below, you can check out the change in hedge fund sentiment towards RGEN over the last 14 quarters. With the smart money’s capital changing hands, there exists a few noteworthy hedge fund managers who were boosting their holdings meaningfully (or already accumulated large positions). 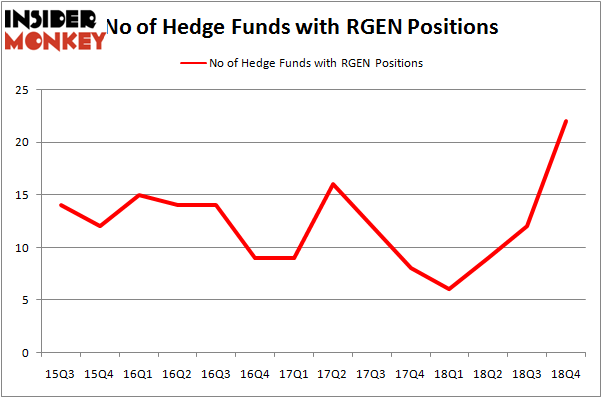 As industrywide interest jumped, specific money managers were breaking ground themselves. Millennium Management, managed by Israel Englander, created the largest position in Repligen Corporation (NASDAQ:RGEN). Millennium Management had $11 million invested in the company at the end of the quarter. Noam Gottesman’s GLG Partners also made a $9.5 million investment in the stock during the quarter. The other funds with new positions in the stock are D. E. Shaw’s D E Shaw, Jim Simons’s Renaissance Technologies, and David Harding’s Winton Capital Management.