Legendary investors such as Jeffrey Talpins and Seth Klarman earn enormous amounts of money for themselves and their investors by doing in-depth research on small-cap stocks that big brokerage houses don’t publish. Small cap stocks -especially when they are screened well- can generate substantial outperformance versus a boring index fund. That’s why we analyze the activity of those elite funds in these small-cap stocks. In the following paragraphs, we analyze Ready Capital Corporation (NYSE:RC) from the perspective of those elite funds.

Is Ready Capital Corporation (NYSE:RC) a safe investment today? Investors who are in the know are selling. The number of long hedge fund positions were cut by 8 recently. Our calculations also showed that RC isn’t among the 30 most popular stocks among hedge funds (see the video below). 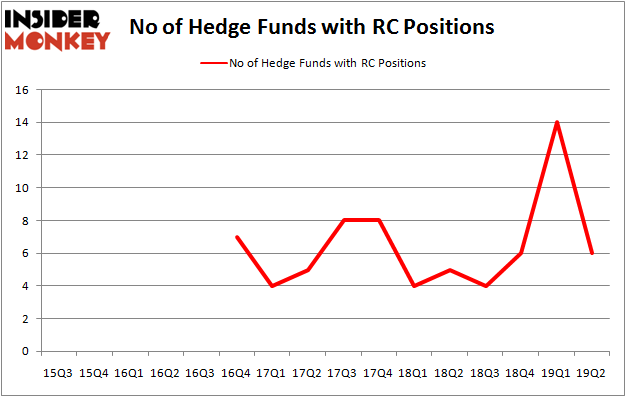 How have hedgies been trading Ready Capital Corporation (NYSE:RC)?

According to publicly available hedge fund and institutional investor holdings data compiled by Insider Monkey, Farallon Capital, holds the largest position in Ready Capital Corporation (NYSE:RC). Farallon Capital has a $33.4 million position in the stock, comprising 0.3% of its 13F portfolio. The second largest stake is held by Andrew Weiss of Weiss Asset Management, with a $7.1 million position; 0.4% of its 13F portfolio is allocated to the stock. Remaining peers that are bullish encompass Ron Mass’s Almitas Capital, David Harding’s Winton Capital Management and John Overdeck and David Siegel’s Two Sigma Advisors.

Judging by the fact that Ready Capital Corporation (NYSE:RC) has witnessed declining sentiment from the smart money, logic holds that there was a specific group of hedgies that decided to sell off their entire stakes in the second quarter. Interestingly, Wilmot B. Harkey and Daniel Mack’s Nantahala Capital Management said goodbye to the biggest position of all the hedgies monitored by Insider Monkey, comprising an estimated $9.5 million in stock, and Israel Englander’s Millennium Management was right behind this move, as the fund cut about $2 million worth. These bearish behaviors are intriguing to say the least, as total hedge fund interest was cut by 8 funds in the second quarter.

As you can see these stocks had an average of 10.5 hedge funds with bullish positions and the average amount invested in these stocks was $193 million. That figure was $46 million in RC’s case. Akorn, Inc. (NASDAQ:AKRX) is the most popular stock in this table. On the other hand Winmark Corporation (NASDAQ:WINA) is the least popular one with only 6 bullish hedge fund positions. Compared to these stocks Ready Capital Corporation (NYSE:RC) is even less popular than WINA. Hedge funds clearly dropped the ball on RC as the stock delivered strong returns, though hedge funds’ consensus picks still generated respectable returns. Our calculations showed that top 20 most popular stocks among hedge funds returned 24.4% in 2019 through September 30th and outperformed the S&P 500 ETF (SPY) by 4 percentage points. A small number of hedge funds were also right about betting on RC as the stock returned 9.5% during the third quarter and outperformed the market by an even larger margin.