Is Quotient Technology Inc. (NYSE:QUOT) a good equity to bet on right now? We like to check what the smart money thinks first before doing extensive research. Although there have been several high profile failed hedge fund picks, the consensus picks among hedge fund investors have historically outperformed the market after adjusting for known risk attributes. It’s not surprising given that hedge funds have access to better information and more resources to find the winners in the stock market.

Quotient Technology Inc. (NYSE:QUOT) has seen a decrease in enthusiasm from smart money recently. QUOT was in 12 hedge funds’ portfolios at the end of December. There were 13 hedge funds in our database with QUOT holdings at the end of the previous quarter. Our calculations also showed that QUOT isn’t among the 30 most popular stocks among hedge funds. 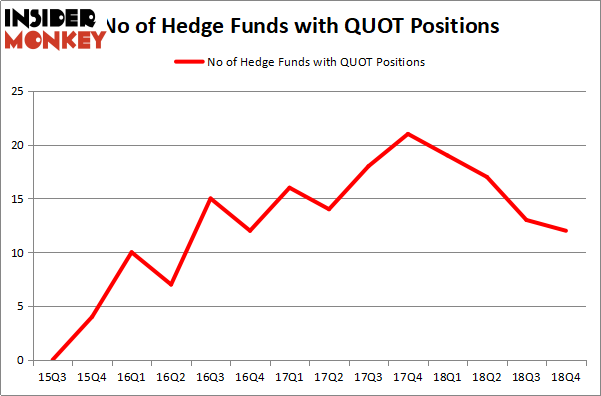 When looking at the institutional investors followed by Insider Monkey, Rima Senvest Management, managed by Richard Mashaal, holds the largest position in Quotient Technology Inc. (NYSE:QUOT). Rima Senvest Management has a $70.8 million position in the stock, comprising 6.1% of its 13F portfolio. The second most bullish fund manager is Claus Moller of P2 Capital Partners, with a $35.7 million position; the fund has 3.6% of its 13F portfolio invested in the stock. Other peers that are bullish encompass D. E. Shaw’s D E Shaw, Spencer M. Waxman’s Shannon River Fund Management and Israel Englander’s Millennium Management.

Judging by the fact that Quotient Technology Inc. (NYSE:QUOT) has experienced bearish sentiment from the aggregate hedge fund industry, logic holds that there were a few fund managers that decided to sell off their positions entirely in the third quarter. It’s worth mentioning that Jim Simons’s Renaissance Technologies cut the largest position of the “upper crust” of funds followed by Insider Monkey, comprising an estimated $5.8 million in stock. Joseph Mathias’s fund, Concourse Capital Management, also dropped its stock, about $1 million worth. These transactions are interesting, as total hedge fund interest fell by 1 funds in the third quarter.

As you can see these stocks had an average of 17.25 hedge funds with bullish positions and the average amount invested in these stocks was $154 million. That figure was $141 million in QUOT’s case. Tivity Health, Inc. (NASDAQ:TVTY) is the most popular stock in this table. On the other hand Lakeland Financial Corporation (NASDAQ:LKFN) is the least popular one with only 11 bullish hedge fund positions. Quotient Technology Inc. (NYSE:QUOT) is not the least popular stock in this group but hedge fund interest is still below average. This is a slightly negative signal and we’d rather spend our time researching stocks that hedge funds are piling on. Our calculations showed that top 15 most popular stocks) among hedge funds returned 24.2% through April 22nd and outperformed the S&P 500 ETF (SPY) by more than 7 percentage points. Unfortunately QUOT wasn’t nearly as popular as these 15 stock (hedge fund sentiment was quite bearish); QUOT investors were disappointed as the stock returned -13.3% and underperformed the market. If you are interested in investing in large cap stocks with huge upside potential, you should check out the top 15 most popular stocks) among hedge funds as 13 of these stocks already outperformed the market this year.