The latest 13F reporting period has come and gone, and Insider Monkey is again at the forefront when it comes to making use of this gold mine of data. We have processed the filings of the more than 700 world-class investment firms that we track and now have access to the collective wisdom contained in these filings, which are based on their December 31 holdings, data that is available nowhere else. Should you consider Quanterix Corporation (NASDAQ:QTRX) for your portfolio? We’ll look to this invaluable collective wisdom for the answer.

Quanterix Corporation (NASDAQ:QTRX) shares haven’t seen a lot of action during the third quarter. Overall, hedge fund sentiment was unchanged. The stock was in 7 hedge funds’ portfolios at the end of the fourth quarter of 2018. At the end of this article we will also compare QTRX to other stocks including DBV Technologies SA – ADR (NASDAQ:DBVT), City Office REIT Inc (NYSE:CIO), and William Lyon Homes (NYSE:WLH) to get a better sense of its popularity. 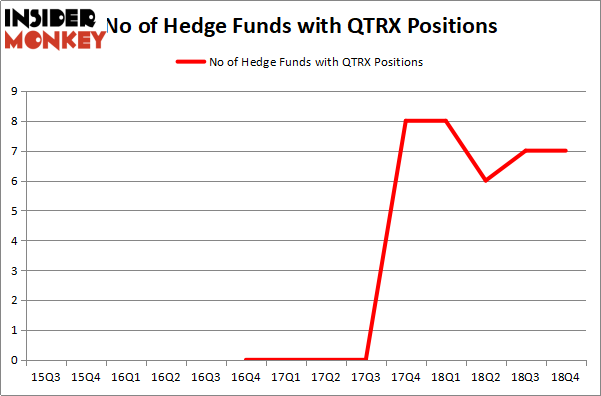 We view hedge fund activity in the stock unfavorable, but in this case there was only a single hedge fund selling its entire position: Portolan Capital Management. One hedge fund selling its entire position doesn’t always imply a bearish intent. Theoretically a hedge fund may decide to sell a promising position in order to invest the proceeds in a more promising idea. However, we don’t think this is the case in this case because only one of the 800+ hedge funds tracked by Insider Monkey identified as a viable investment and initiated a position in the stock (that fund was Diag Capital).

As you can see these stocks had an average of 11.5 hedge funds with bullish positions and the average amount invested in these stocks was $51 million. That figure was $31 million in QTRX’s case. William Lyon Homes (NYSE:WLH) is the most popular stock in this table. On the other hand DBV Technologies SA – ADR (NASDAQ:DBVT) is the least popular one with only 5 bullish hedge fund positions. Quanterix Corporation (NASDAQ:QTRX) is not the least popular stock in this group but hedge fund interest is still below average. Our calculations showed that top 15 most popular stocks) among hedge funds returned 24.2% through April 22nd and outperformed the S&P 500 ETF (SPY) by more than 7 percentage points. A small number of hedge funds were also right about betting on QTRX, though not to the same extent, as the stock returned 19.7% and outperformed the market as well.