How do we determine whether Prothena Corporation plc (NASDAQ:PRTA) makes for a good investment at the moment? We analyze the sentiment of a select group of the very best investors in the world, who spend immense amounts of time and resources studying companies. They may not always be right (no one is), but data shows that their consensus long positions have historically outperformed the market when we adjust for known risk factors.

Is Prothena Corporation plc (NASDAQ:PRTA) the right pick for your portfolio? Money managers are getting less bullish. The number of long hedge fund positions were trimmed by 1 in recent months. Our calculations also showed that PRTA isn’t among the 30 most popular stocks among hedge funds. PRTA was in 13 hedge funds’ portfolios at the end of the fourth quarter of 2018. There were 14 hedge funds in our database with PRTA positions at the end of the previous quarter.

What does the smart money think about Prothena Corporation plc (NASDAQ:PRTA)?

Heading into the first quarter of 2019, a total of 13 of the hedge funds tracked by Insider Monkey were bullish on this stock, a change of -7% from the second quarter of 2018. By comparison, 14 hedge funds held shares or bullish call options in PRTA a year ago. With the smart money’s capital changing hands, there exists an “upper tier” of key hedge fund managers who were adding to their stakes significantly (or already accumulated large positions). 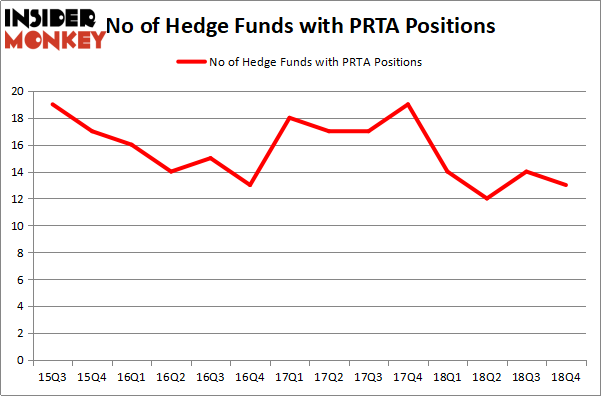 Of the funds tracked by Insider Monkey, Neil Woodford’s Woodford Investment Management has the number one position in Prothena Corporation plc (NASDAQ:PRTA), worth close to $122.8 million, corresponding to 10.6% of its total 13F portfolio. On Woodford Investment Management’s heels is Scopia Capital, led by Matt Sirovich and Jeremy Mindich, holding a $47.6 million position; the fund has 1.6% of its 13F portfolio invested in the stock. Some other peers that are bullish comprise Ken Griffin’s Citadel Investment Group, William Leland Edwards’s Palo Alto Investors and Oleg Nodelman’s EcoR1 Capital.

Seeing as Prothena Corporation plc (NASDAQ:PRTA) has faced bearish sentiment from the entirety of the hedge funds we track, we can see that there lies a certain “tier” of hedgies that decided to sell off their entire stakes heading into Q3. Intriguingly, Jim Simons’s Renaissance Technologies dumped the largest position of the “upper crust” of funds watched by Insider Monkey, valued at an estimated $0.8 million in stock, and Cliff Asness’s AQR Capital Management was right behind this move, as the fund said goodbye to about $0.2 million worth. These bearish behaviors are intriguing to say the least, as aggregate hedge fund interest dropped by 1 funds heading into Q3.

As you can see these stocks had an average of 10.5 hedge funds with bullish positions and the average amount invested in these stocks was $35 million. That figure was $210 million in PRTA’s case. Harmonic Inc (NASDAQ:HLIT) is the most popular stock in this table. On the other hand Kimbell Royalty Partners, LP (NYSE:KRP) is the least popular one with only 7 bullish hedge fund positions. Prothena Corporation plc (NASDAQ:PRTA) is not the most popular stock in this group but hedge fund interest is still above average. This is a slightly positive signal but we’d rather spend our time researching stocks that hedge funds are piling on. Our calculations showed that top 15 most popular stocks) among hedge funds returned 24.2% through April 22nd and outperformed the S&P 500 ETF (SPY) by more than 7 percentage points. Unfortunately PRTA wasn’t nearly as popular as these 15 stock and hedge funds that were betting on PRTA were disappointed as the stock returned 4.9% and underperformed the market. If you are interested in investing in large cap stocks with huge upside potential, you should check out the top 15 most popular stocks) among hedge funds as 13 of these stocks already outperformed the market this year.