The 700+ hedge funds and famous money managers tracked by Insider Monkey have already compiled and submitted their 13F filings for the first quarter, which unveil their equity positions as of March 31. We went through these filings, fixed typos and other more significant errors and identified the changes in hedge fund portfolios. Our extensive review of these public filings is finally over, so this article is set to reveal the smart money sentiment towards Protagonist Therapeutics, Inc. (NASDAQ:PTGX).

Hedge fund interest in Protagonist Therapeutics, Inc. (NASDAQ:PTGX) shares was flat at the end of last quarter. This is usually a negative indicator. The level and the change in hedge fund popularity aren’t the only variables you need to analyze to decipher hedge funds’ perspectives. A stock may witness a boost in popularity but it may still be less popular than similarly priced stocks. That’s why at the end of this article we will examine companies such as eGain Communications Corporation (NASDAQ:EGAN), Biglari Holdings Inc (NYSE:BH), and WhiteHorse Finance, Inc. (NASDAQ:WHF) to gather more data points.

How have hedgies been trading Protagonist Therapeutics, Inc. (NASDAQ:PTGX)?

At the end of the first quarter, a total of 15 of the hedge funds tracked by Insider Monkey were bullish on this stock, a change of 0% from the fourth quarter of 2018. The graph below displays the number of hedge funds with bullish position in PTGX over the last 15 quarters. With the smart money’s capital changing hands, there exists an “upper tier” of key hedge fund managers who were boosting their stakes meaningfully (or already accumulated large positions). 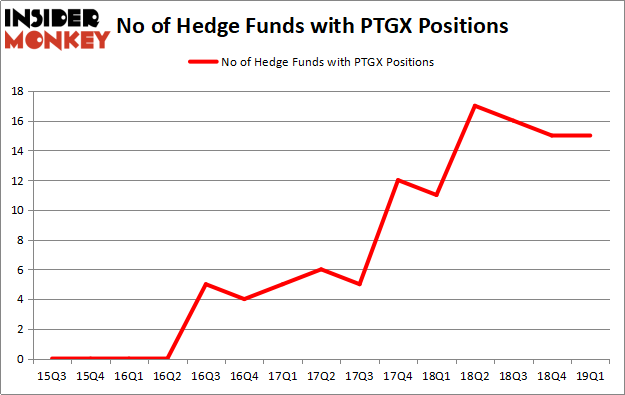 More specifically, Perceptive Advisors was the largest shareholder of Protagonist Therapeutics, Inc. (NASDAQ:PTGX), with a stake worth $26 million reported as of the end of March. Trailing Perceptive Advisors was Farallon Capital, which amassed a stake valued at $22.5 million. Biotechnology Value Fund / BVF Inc, Millennium Management, and Ghost Tree Capital were also very fond of the stock, giving the stock large weights in their portfolios.

Judging by the fact that Protagonist Therapeutics, Inc. (NASDAQ:PTGX) has witnessed bearish sentiment from the entirety of the hedge funds we track, it’s safe to say that there were a few money managers that decided to sell off their positions entirely last quarter. Interestingly, Jeffrey Jay and David Kroin’s Great Point Partners sold off the largest investment of the “upper crust” of funds tracked by Insider Monkey, totaling an estimated $6.4 million in stock. Peter Rathjens, Bruce Clarke and John Campbell’s fund, Arrowstreet Capital, also dropped its stock, about $0.2 million worth. These transactions are important to note, as total hedge fund interest stayed the same (this is a bearish signal in our experience).

Let’s now take a look at hedge fund activity in other stocks – not necessarily in the same industry as Protagonist Therapeutics, Inc. (NASDAQ:PTGX) but similarly valued. We will take a look at eGain Corporation (NASDAQ:EGAN), Biglari Holdings Inc (NYSE:BH), WhiteHorse Finance, Inc. (NASDAQ:WHF), and NeoPhotonics Corp (NYSE:NPTN). This group of stocks’ market valuations are similar to PTGX’s market valuation.

As you can see these stocks had an average of 12 hedge funds with bullish positions and the average amount invested in these stocks was $34 million. That figure was $104 million in PTGX’s case. NeoPhotonics Corp (NYSE:NPTN) is the most popular stock in this table. On the other hand WhiteHorse Finance, Inc. (NASDAQ:WHF) is the least popular one with only 3 bullish hedge fund positions. Protagonist Therapeutics, Inc. (NASDAQ:PTGX) is not the most popular stock in this group but hedge fund interest is still above average. This is a slightly positive signal but we’d rather spend our time researching stocks that hedge funds are piling on. Our calculations showed that top 20 most popular stocks among hedge funds returned 6.2% in Q2 through June 19th and outperformed the S&P 500 ETF (SPY) by nearly 3 percentage points. Unfortunately PTGX wasn’t nearly as popular as these 20 stocks and hedge funds that were betting on PTGX were disappointed as the stock returned -4.1% during the same period and underperformed the market. If you are interested in investing in large cap stocks with huge upside potential, you should check out the top 20 most popular stocks among hedge funds as 13 of these stocks already outperformed the market so far in Q2.