Is Prosperity Bancshares, Inc. (NYSE:PB) a good place to invest some of your money right now? We can gain invaluable insight to help us answer that question by studying the investment trends of top investors, who employ world-class Ivy League graduates, who are given immense resources and industry contacts to put their financial expertise to work. The top picks of these firms have historically outperformed the market when we account for known risk factors, making them very valuable investment ideas.

Is Prosperity Bancshares, Inc. (NYSE:PB) a buy, sell, or hold? Prominent investors are taking a bullish view. The number of long hedge fund bets advanced by 3 recently. Our calculations also showed that PB isn’t among the 30 most popular stocks among hedge funds.

What does the smart money think about Prosperity Bancshares, Inc. (NYSE:PB)? 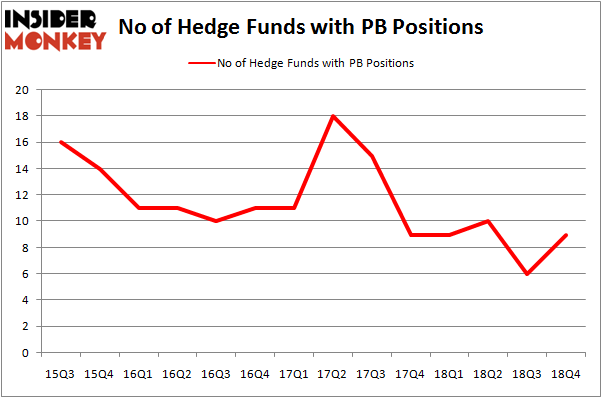 When looking at the institutional investors followed by Insider Monkey, Fisher Asset Management, managed by Ken Fisher, holds the number one position in Prosperity Bancshares, Inc. (NYSE:PB). Fisher Asset Management has a $23.5 million position in the stock, comprising less than 0.1%% of its 13F portfolio. Coming in second is Israel Englander of Millennium Management, with a $8.7 million position; the fund has less than 0.1%% of its 13F portfolio invested in the stock. Remaining hedge funds and institutional investors that hold long positions include Martin Whitman’s Third Avenue Management, Dmitry Balyasny’s Balyasny Asset Management and Michael Platt and William Reeves’s BlueCrest Capital Mgmt..

As aggregate interest increased, specific money managers have been driving this bullishness. ExodusPoint Capital, managed by Michael Gelband, created the largest position in Prosperity Bancshares, Inc. (NYSE:PB). ExodusPoint Capital had $2.4 million invested in the company at the end of the quarter. Jim Simons’s Renaissance Technologies also made a $1.1 million investment in the stock during the quarter. The following funds were also among the new PB investors: Brandon Haley’s Holocene Advisors and Matthew Hulsizer’s PEAK6 Capital Management.

As you can see these stocks had an average of 27.25 hedge funds with bullish positions and the average amount invested in these stocks was $737 million. That figure was $53 million in PB’s case. W.R. Grace & Co. (NYSE:GRA) is the most popular stock in this table. On the other hand Life Storage, Inc. (NYSE:LSI) is the least popular one with only 13 bullish hedge fund positions. Compared to these stocks Prosperity Bancshares, Inc. (NYSE:PB) is even less popular than LSI. Hedge funds dodged a bullet by taking a bearish stance towards PB. Our calculations showed that the top 15 most popular hedge fund stocks returned 24.2% through April 22nd and outperformed the S&P 500 ETF (SPY) by more than 7 percentage points. Unfortunately PB wasn’t nearly as popular as these 15 stock (hedge fund sentiment was very bearish); PB investors were disappointed as the stock returned 14.7% and underperformed the market. If you are interested in investing in large cap stocks with huge upside potential, you should check out the top 15 most popular stocks) among hedge funds as 13 of these stocks already outperformed the market this year.