Looking for stocks with high upside potential? Just follow the big players within the hedge fund industry. Why should you do so? Let’s take a brief look at what statistics have to say about hedge funds’ stock picking abilities to illustrate. The Standard and Poor’s 500 Index returned approximately 13.1% in the 2.5 months of 2019 (including dividend payments). Conversely, hedge funds’ 15 preferred S&P 500 stocks generated a return of 19.7% during the same period, with 93% of these stock picks outperforming the broader market benchmark. Coincidence? It might happen to be so, but it is unlikely. Our research covering the last 18 years indicates that hedge funds’ stock picks generate superior risk-adjusted returns. That’s why we believe it is wise to check hedge fund activity before you invest your time or your savings on a stock like Premier Inc (NASDAQ:PINC).

Premier Inc (NASDAQ:PINC) was in 18 hedge funds’ portfolios at the end of the fourth quarter of 2018. PINC shareholders have witnessed a decrease in support from the world’s most elite money managers in recent months. There were 21 hedge funds in our database with PINC holdings at the end of the previous quarter. Our calculations also showed that PINC isn’t among the 30 most popular stocks among hedge funds.

To most stock holders, hedge funds are perceived as unimportant, outdated financial vehicles of yesteryear. While there are greater than 8000 funds with their doors open at present, Our experts hone in on the aristocrats of this club, approximately 750 funds. These money managers manage the majority of the smart money’s total asset base, and by monitoring their top investments, Insider Monkey has identified a number of investment strategies that have historically outperformed the market. Insider Monkey’s flagship hedge fund strategy exceeded the S&P 500 index by nearly 5 percentage points per year since its inception in May 2014 through early November 2018. We were able to generate large returns even by identifying short candidates. Our portfolio of short stocks lost 27.5% since February 2017 (through March 12th) even though the market was up nearly 25% during the same period. We just shared a list of 6 short targets in our latest quarterly update and they are already down an average of 6% in less than a month.

What have hedge funds been doing with Premier Inc (NASDAQ:PINC)?

Heading into the first quarter of 2019, a total of 18 of the hedge funds tracked by Insider Monkey were bullish on this stock, a change of -14% from the previous quarter. On the other hand, there were a total of 13 hedge funds with a bullish position in PINC a year ago. With hedge funds’ positions undergoing their usual ebb and flow, there exists a few key hedge fund managers who were boosting their holdings considerably (or already accumulated large positions). 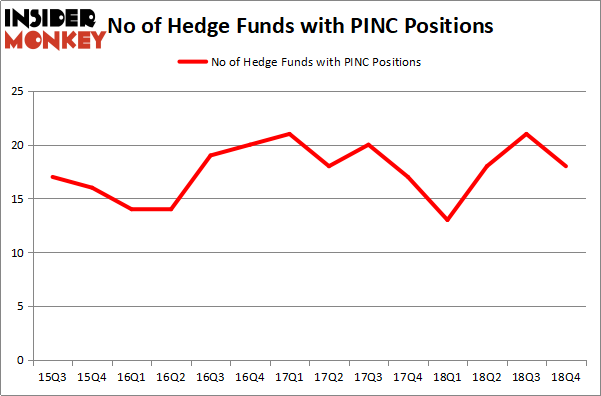 When looking at the institutional investors followed by Insider Monkey, Jim Simons’s Renaissance Technologies has the number one position in Premier Inc (NASDAQ:PINC), worth close to $79.7 million, amounting to 0.1% of its total 13F portfolio. On Renaissance Technologies’s heels is John Overdeck and David Siegel of Two Sigma Advisors, with a $24.9 million position; 0.1% of its 13F portfolio is allocated to the company. Other professional money managers that hold long positions include Ken Griffin’s Citadel Investment Group, Steven Richman’s East Side Capital (RR Partners) and Israel Englander’s Millennium Management.

Since Premier Inc (NASDAQ:PINC) has experienced falling interest from the aggregate hedge fund industry, it’s easy to see that there were a few hedgies that decided to sell off their positions entirely in the third quarter. At the top of the heap, Peter Rathjens, Bruce Clarke and John Campbell’s Arrowstreet Capital said goodbye to the largest position of the “upper crust” of funds followed by Insider Monkey, valued at about $10.7 million in stock, and Benjamin A. Smith’s Laurion Capital Management was right behind this move, as the fund dropped about $8.6 million worth. These moves are interesting, as aggregate hedge fund interest was cut by 3 funds in the third quarter.

As you can see these stocks had an average of 13 hedge funds with bullish positions and the average amount invested in these stocks was $122 million. That figure was $182 million in PINC’s case. Brookfield Property REIT Inc. (NASDAQ:BPR) is the most popular stock in this table. On the other hand South Jersey Industries Inc (NYSE:SJI) is the least popular one with only 12 bullish hedge fund positions. Compared to these stocks Premier Inc (NASDAQ:PINC) is more popular among hedge funds. Our calculations showed that top 15 most popular stocks) among hedge funds returned 24.2% through April 22nd and outperformed the S&P 500 ETF (SPY) by more than 7 percentage points. Unfortunately PINC wasn’t nearly as popular as these 15 stock and hedge funds that were betting on PINC were disappointed as the stock returned -13.7% and underperformed the market. If you are interested in investing in large cap stocks with huge upside potential, you should check out the top 15 most popular stocks) among hedge funds as 13 of these stocks already outperformed the market this year.