A market correction in the fourth quarter, spurred by a number of global macroeconomic concerns and rising interest rates ended up having a negative impact on the markets and many hedge funds as a result. The stocks of smaller companies were especially hard hit during this time as investors fled to investments seen as being safer. This is evident in the fact that the Russell 2000 ETF underperformed the S&P 500 ETF by nearly 7 percentage points during the fourth quarter. We also received indications that hedge funds were trimming their positions amid the market volatility and uncertainty, and given their greater inclination towards smaller cap stocks than other investors, it follows that a stronger sell-off occurred in those stocks. Let’s study the hedge fund sentiment to see how those concerns affected their ownership of Preferred Bank (NASDAQ:PFBC) during the quarter.

Preferred Bank (NASDAQ:PFBC) shares haven’t seen a lot of action during the third quarter. Overall, hedge fund sentiment was unchanged. The stock was in 11 hedge funds’ portfolios at the end of the fourth quarter of 2018. At the end of this article we will also compare PFBC to other stocks including Speedway Motorsports, Inc. (NYSE:TRK), TrustCo Bank Corp NY (NASDAQ:TRST), and Nanometrics Incorporated (NASDAQ:NANO) to get a better sense of its popularity.

If you’d ask most shareholders, hedge funds are assumed to be underperforming, outdated investment vehicles of yesteryear. While there are more than 8000 funds in operation at present, Our experts look at the crème de la crème of this club, about 750 funds. Most estimates calculate that this group of people manage the lion’s share of the hedge fund industry’s total asset base, and by shadowing their unrivaled investments, Insider Monkey has uncovered various investment strategies that have historically surpassed the S&P 500 index. Insider Monkey’s flagship hedge fund strategy exceeded the S&P 500 index by nearly 5 percentage points annually since its inception in May 2014 through early November 2018. We were able to generate large returns even by identifying short candidates. Our portfolio of short stocks lost 27.5% since February 2017 (through March 12th) even though the market was up nearly 25% during the same period. We just shared a list of 6 short targets in our latest quarterly update and they are already down an average of 6% in less than a month.

At Q4’s end, a total of 11 of the hedge funds tracked by Insider Monkey were long this stock, a change of 0% from the second quarter of 2018. On the other hand, there were a total of 13 hedge funds with a bullish position in PFBC a year ago. With the smart money’s positions undergoing their usual ebb and flow, there exists a few noteworthy hedge fund managers who were adding to their stakes meaningfully (or already accumulated large positions). 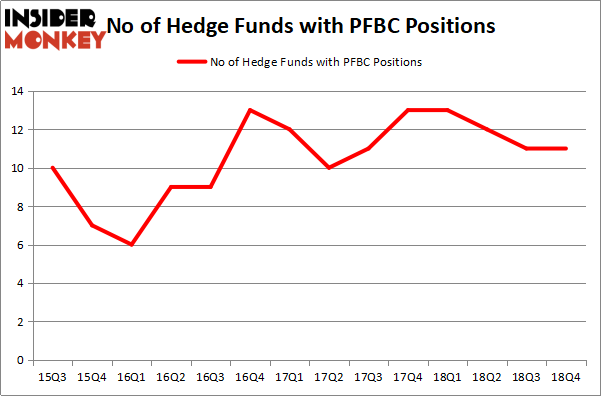 Among these funds, Renaissance Technologies held the most valuable stake in Preferred Bank (NASDAQ:PFBC), which was worth $14.5 million at the end of the fourth quarter. On the second spot was Basswood Capital which amassed $7.3 million worth of shares. Moreover, Millennium Management, Marshall Wace LLP, and Two Sigma Advisors were also bullish on Preferred Bank (NASDAQ:PFBC), allocating a large percentage of their portfolios to this stock.

Due to the fact that Preferred Bank (NASDAQ:PFBC) has faced falling interest from the aggregate hedge fund industry, it’s easy to see that there were a few funds that decided to sell off their entire stakes by the end of the third quarter. At the top of the heap, George McCabe’s Portolan Capital Management cut the largest position of the 700 funds followed by Insider Monkey, worth an estimated $4.5 million in stock, and Matthew Tewksbury’s Stevens Capital Management was right behind this move, as the fund dumped about $0.5 million worth. These bearish behaviors are important to note, as aggregate hedge fund interest stayed the same (this is a bearish signal in our experience).

As you can see these stocks had an average of 13 hedge funds with bullish positions and the average amount invested in these stocks was $53 million. That figure was $39 million in PFBC’s case. Nanometrics Incorporated (NASDAQ:NANO) is the most popular stock in this table. On the other hand TrustCo Bank Corp NY (NASDAQ:TRST) is the least popular one with only 9 bullish hedge fund positions. Preferred Bank (NASDAQ:PFBC) is not the least popular stock in this group but hedge fund interest is still below average. This is a slightly negative signal and we’d rather spend our time researching stocks that hedge funds are piling on. Our calculations showed that top 15 most popular stocks) among hedge funds returned 24.2% through April 22nd and outperformed the S&P 500 ETF (SPY) by more than 7 percentage points. Unfortunately PFBC wasn’t nearly as popular as these 15 stock (hedge fund sentiment was quite bearish); PFBC investors were disappointed as the stock returned 8.3% and underperformed the market. If you are interested in investing in large cap stocks with huge upside potential, you should check out the top 15 most popular stocks) among hedge funds as 13 of these stocks already outperformed the market this year.