Portland General Electric Company (NYSE:POR) has experienced an increase in activity from the world’s largest hedge funds in recent months. POR was in 19 hedge funds’ portfolios at the end of December. There were 16 hedge funds in our database with POR holdings at the end of the previous quarter. Our calculations also showed that POR isn’t among the 30 most popular stocks among hedge funds.

What does the smart money think about Portland General Electric Company (NYSE:POR)?

At the end of the fourth quarter, a total of 19 of the hedge funds tracked by Insider Monkey held long positions in this stock, a change of 19% from one quarter earlier. The graph below displays the number of hedge funds with bullish position in POR over the last 14 quarters. With hedgies’ capital changing hands, there exists a few key hedge fund managers who were boosting their stakes significantly (or already accumulated large positions). 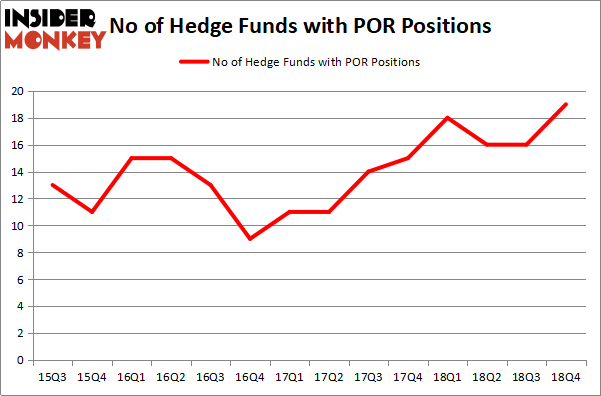 According to publicly available hedge fund and institutional investor holdings data compiled by Insider Monkey, Jim Simons’s Renaissance Technologies has the largest position in Portland General Electric Company (NYSE:POR), worth close to $104.7 million, corresponding to 0.1% of its total 13F portfolio. Sitting at the No. 2 spot is GLG Partners, managed by Noam Gottesman, which holds a $38.3 million position; 0.2% of its 13F portfolio is allocated to the company. Some other members of the smart money that are bullish include D. E. Shaw’s D E Shaw, Israel Englander’s Millennium Management and Brian Olson, Baehyun Sung, and Jamie Waters’s Blackstart Capital.

Now, specific money managers were leading the bulls’ herd. ExodusPoint Capital, managed by Michael Gelband, established the most outsized position in Portland General Electric Company (NYSE:POR). ExodusPoint Capital had $2.3 million invested in the company at the end of the quarter. Joel Greenblatt’s Gotham Asset Management also made a $0.6 million investment in the stock during the quarter. The other funds with brand new POR positions are Hoon Kim’s Quantinno Capital and Gavin Saitowitz and Cisco J. del Valle’s Springbok Capital.

As you can see these stocks had an average of 27.5 hedge funds with bullish positions and the average amount invested in these stocks was $563 million. That figure was $250 million in POR’s case. Tesaro Inc (NASDAQ:TSRO) is the most popular stock in this table. On the other hand Bilibili Inc. (NASDAQ:BILI) is the least popular one with only 20 bullish hedge fund positions. Compared to these stocks Portland General Electric Company (NYSE:POR) is even less popular than BILI. Hedge funds dodged a bullet by taking a bearish stance towards POR. Our calculations showed that the top 15 most popular hedge fund stocks returned 24.2% through April 22nd and outperformed the S&P 500 ETF (SPY) by more than 7 percentage points. Unfortunately POR wasn’t nearly as popular as these 15 stock (hedge fund sentiment was very bearish); POR investors were disappointed as the stock returned 10% and underperformed the market. If you are interested in investing in large cap stocks with huge upside potential, you should check out the top 15 most popular stocks) among hedge funds as 13 of these stocks already outperformed the market this year.