Is PNC Financial Services Group Inc. (NYSE:PNC) a good equity to bet on right now? We like to check what the smart money thinks first before doing extensive research. Although there have been several high profile failed hedge fund picks, the consensus picks among hedge fund investors have historically outperformed the market after adjusting for known risk attributes. It’s not surprising given that hedge funds have access to better information and more resources to predict the winners in the stock market.

PNC Financial Services Group Inc. (NYSE:PNC) investors should pay attention to an increase in hedge fund interest lately. Our calculations also showed that PNC isn’t among the 30 most popular stocks among hedge funds.

Heading into the second quarter of 2019, a total of 40 of the hedge funds tracked by Insider Monkey held long positions in this stock, a change of 5% from the previous quarter. By comparison, 34 hedge funds held shares or bullish call options in PNC a year ago. With hedge funds’ sentiment swirling, there exists a select group of notable hedge fund managers who were upping their holdings meaningfully (or already accumulated large positions). 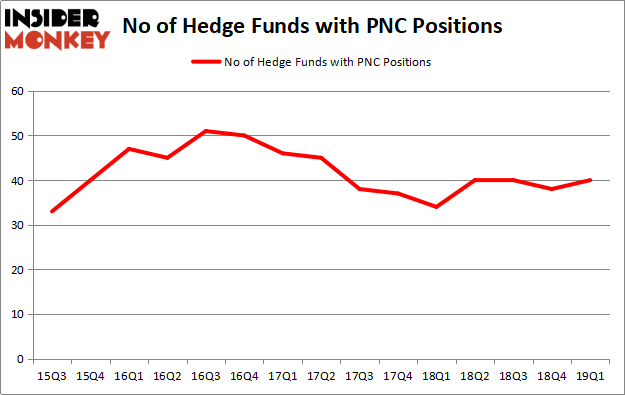 Among these funds, Berkshire Hathaway held the most valuable stake in PNC Financial Services Group Inc. (NYSE:PNC), which was worth $1063.6 million at the end of the first quarter. On the second spot was Citadel Investment Group which amassed $425.8 million worth of shares. Moreover, Arrowstreet Capital, Diamond Hill Capital, and Adage Capital Management were also bullish on PNC Financial Services Group Inc. (NYSE:PNC), allocating a large percentage of their portfolios to this stock.

With a general bullishness amongst the heavyweights, key hedge funds were leading the bulls’ herd. Point72 Asset Management, managed by Steve Cohen, assembled the largest position in PNC Financial Services Group Inc. (NYSE:PNC). Point72 Asset Management had $86.5 million invested in the company at the end of the quarter. Clint Carlson’s Carlson Capital also made a $55.8 million investment in the stock during the quarter. The other funds with new positions in the stock are Paul Marshall and Ian Wace’s Marshall Wace LLP, Michael Kharitonov and Jon David McAuliffe’s Voleon Capital, and Brandon Haley’s Holocene Advisors.

As you can see these stocks had an average of 31.75 hedge funds with bullish positions and the average amount invested in these stocks was $1139 million. That figure was $2516 million in PNC’s case. Boston Scientific Corporation (NYSE:BSX) is the most popular stock in this table. On the other hand The Southern Company (NYSE:SO) is the least popular one with only 19 bullish hedge fund positions. PNC Financial Services Group Inc. (NYSE:PNC) is not the most popular stock in this group but hedge fund interest is still above average. Our calculations showed that top 20 most popular stocks among hedge funds returned 1.9% in Q2 through May 30th and outperformed the S&P 500 ETF (SPY) by more than 3 percentage points. Hedge funds were also right about betting on PNC as the stock returned 5.6% during the same period and outperformed the market by an even larger margin. Hedge funds were rewarded for their relative bullishness.