Is Piper Jaffray Companies (NYSE:PJC) a good investment right now? We check hedge fund and billionaire investor sentiment before delving into hours of research. Hedge funds spend millions of dollars on Ivy League graduates, expert networks, and get tips from investment bankers and industry insiders. Sure they sometimes fail miserably but historically their consensus stock picks outperformed the market after adjusting for known risk factors.

Piper Jaffray Companies (NYSE:PJC) shareholders have witnessed a decrease in enthusiasm from smart money recently. PJC was in 5 hedge funds’ portfolios at the end of December. There were 7 hedge funds in our database with PJC positions at the end of the previous quarter. Our calculations also showed that PJC isn’t among the 30 most popular stocks among hedge funds.

To most market participants, hedge funds are viewed as underperforming, outdated investment tools of years past. While there are over 8000 funds trading today, We hone in on the masters of this club, about 750 funds. These hedge fund managers handle the lion’s share of the hedge fund industry’s total capital, and by watching their best equity investments, Insider Monkey has unearthed numerous investment strategies that have historically outrun the broader indices. Insider Monkey’s flagship hedge fund strategy outstripped the S&P 500 index by nearly 5 percentage points per year since its inception in May 2014 through early November 2018. We were able to generate large returns even by identifying short candidates. Our portfolio of short stocks lost 27.5% since February 2017 (through March 12th) even though the market was up nearly 25% during the same period. We just shared a list of 6 short targets in our latest quarterly update and they are already down an average of 6% in less than a month.

What does the smart money think about Piper Jaffray Companies (NYSE:PJC)? 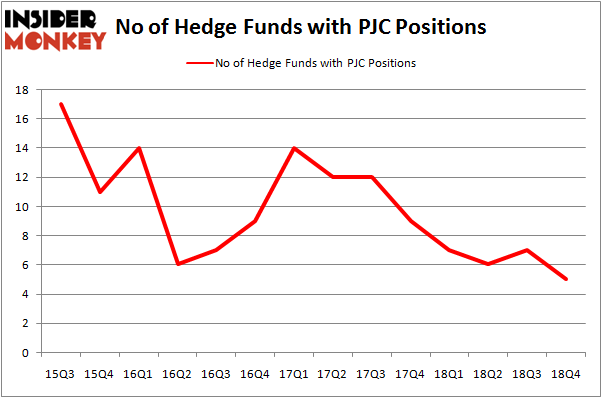 The largest stake in Piper Jaffray Companies (NYSE:PJC) was held by Renaissance Technologies, which reported holding $30.1 million worth of stock at the end of December. It was followed by Fisher Asset Management with a $6.9 million position. Other investors bullish on the company included Arrowstreet Capital, Millennium Management, and AQR Capital Management.

Seeing as Piper Jaffray Companies (NYSE:PJC) has faced falling interest from the aggregate hedge fund industry, logic holds that there were a few fund managers that decided to sell off their entire stakes last quarter. It’s worth mentioning that Matthew Hulsizer’s PEAK6 Capital Management dumped the biggest stake of all the hedgies watched by Insider Monkey, comprising close to $0.8 million in call options. Ken Griffin’s fund, Citadel Investment Group, also dropped its call options, about $0.3 million worth. These bearish behaviors are important to note, as aggregate hedge fund interest was cut by 2 funds last quarter.

As you can see these stocks had an average of 15.75 hedge funds with bullish positions and the average amount invested in these stocks was $123 million. That figure was $39 million in PJC’s case. SeaDrill Limited (NYSE:SDRL) is the most popular stock in this table. On the other hand Baytex Energy Corp (NYSE:BTE) is the least popular one with only 12 bullish hedge fund positions. Compared to these stocks Piper Jaffray Companies (NYSE:PJC) is even less popular than BTE. Our calculations showed that top 15 most popular stocks) among hedge funds returned 24.2% through April 22nd and outperformed the S&P 500 ETF (SPY) by more than 7 percentage points. A small number of hedge funds were also right about betting on PJC, though not to the same extent, as the stock returned 18.4% and outperformed the market as well.