Phillips 66 (NYSE:PSX) has seen an increase in support from the world’s most elite money managers recently. Our calculations also showed that PSX isn’t among the 30 most popular stocks among hedge funds.

At the end of the fourth quarter, a total of 47 of the hedge funds tracked by Insider Monkey held long positions in this stock, a change of 9% from the second quarter of 2018. The graph below displays the number of hedge funds with bullish position in PSX over the last 14 quarters. With hedge funds’ capital changing hands, there exists a select group of notable hedge fund managers who were upping their stakes considerably (or already accumulated large positions). 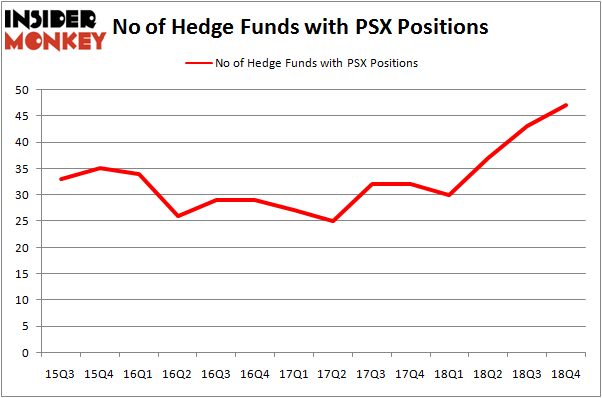 More specifically, Berkshire Hathaway was the largest shareholder of Phillips 66 (NYSE:PSX), with a stake worth $1024.8 million reported as of the end of September. Trailing Berkshire Hathaway was AQR Capital Management, which amassed a stake valued at $185.4 million. Millennium Management, Renaissance Technologies, and East Side Capital (RR Partners) were also very fond of the stock, giving the stock large weights in their portfolios.

With a general bullishness amongst the heavyweights, key money managers have jumped into Phillips 66 (NYSE:PSX) headfirst. Capital Growth Management, managed by Ken Heebner, established the biggest position in Phillips 66 (NYSE:PSX). Capital Growth Management had $33.6 million invested in the company at the end of the quarter. Michael Kharitonov and Jon David McAuliffe’s Voleon Capital also made a $12.1 million investment in the stock during the quarter. The following funds were also among the new PSX investors: Clint Carlson’s Carlson Capital, George Soros’s Soros Fund Management, and Peter Algert and Kevin Coldiron’s Algert Coldiron Investors.

As you can see these stocks had an average of 28 hedge funds with bullish positions and the average amount invested in these stocks was $1157 million. That figure was $2113 million in PSX’s case. Humana Inc (NYSE:HUM) is the most popular stock in this table. On the other hand Mizuho Financial Group Inc. (NYSE:MFG) is the least popular one with only 4 bullish hedge fund positions. Compared to these stocks Phillips 66 (NYSE:PSX) is more popular among hedge funds. Considering that hedge funds are fond of this stock in relation to its market cap peers, it may be a good idea to analyze it in detail and potentially include it in your portfolio. Our calculations showed that top 15 most popular stocks among hedge funds returned 19.7% through March 15th and outperformed the S&P 500 ETF (SPY) by 6.6 percentage points. Hedge funds were also right about betting on PSX, though not to the same extent, as the stock returned 15.3% and outperformed the market as well.

Hedge Funds Have Never Been This Bullish On Thermo Fisher Scientific Inc. (...
Monthly Newsletter Strategy
Download a free copy of our newsletter and see the details inside!
Hedge Fund Resource Center
Related News
Two Sigma Advisors’ Return, AUM, and Holdings 4 Stocks Billionaire Warren Buffett and Insiders Love (and 1 They Hate) Hedge Funds Are Betting On Phillips 66 (PSX) 20 Dividend Stocks That Billionaires Are Piling On 10 Best Energy Dividend Stocks for Income Investors Is Phillips 66 (PSX) Going to Burn These Hedge Funds? Ford, Phillips 66, Yum! Brands, and Two Other Stocks Are in Spotlight Today for Various Reasons Ten of the Most Common Addictions 13 African Countries with the Largest White Population in 2018 6 Causes of Human Trafficking in Africa, India, and US
Billionaire Hedge Funds