The government requires hedge funds and wealthy investors that crossed the $100 million equity holdings threshold are required to file a report that shows their positions at the end of every quarter. Even though it isn’t the intention, these filings level the playing field for ordinary investors. The latest round of 13F filings disclosed the funds’ positions on December 31. We at Insider Monkey have made an extensive database of nearly 750 of those elite funds and prominent investors’ filings. In this article, we analyze how these elite funds and prominent investors traded Phibro Animal Health Corp (NASDAQ:PAHC) based on those filings.

Is Phibro Animal Health Corp (NASDAQ:PAHC) worth your attention right now? Money managers are becoming less hopeful. The number of bullish hedge fund positions went down by 1 lately. Our calculations also showed that PAHC isn’t among the 30 most popular stocks among hedge funds.

To the average investor there are many methods stock traders can use to evaluate stocks. Two of the most underrated methods are hedge fund and insider trading moves. Our researchers have shown that, historically, those who follow the top picks of the top money managers can outclass their index-focused peers by a solid margin (see the details here).

What have hedge funds been doing with Phibro Animal Health Corp (NASDAQ:PAHC)?

At Q4’s end, a total of 20 of the hedge funds tracked by Insider Monkey were bullish on this stock, a change of -5% from the previous quarter. Below, you can check out the change in hedge fund sentiment towards PAHC over the last 14 quarters. With the smart money’s capital changing hands, there exists a select group of notable hedge fund managers who were increasing their stakes considerably (or already accumulated large positions). 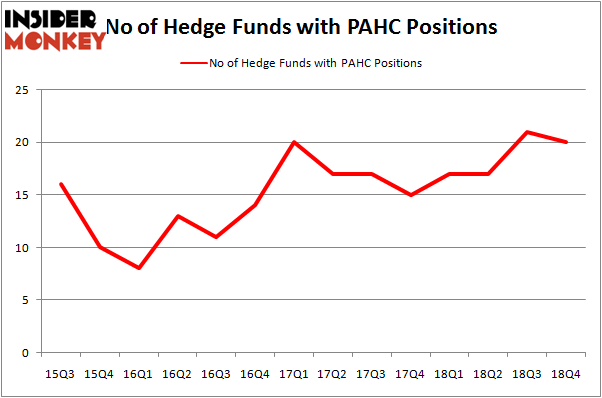 More specifically, Renaissance Technologies was the largest shareholder of Phibro Animal Health Corp (NASDAQ:PAHC), with a stake worth $26.7 million reported as of the end of December. Trailing Renaissance Technologies was AQR Capital Management, which amassed a stake valued at $6.6 million. Millennium Management, GLG Partners, and Citadel Investment Group were also very fond of the stock, giving the stock large weights in their portfolios.

Due to the fact that Phibro Animal Health Corp (NASDAQ:PAHC) has faced bearish sentiment from the smart money, logic holds that there was a specific group of fund managers that elected to cut their entire stakes heading into Q3. Interestingly, Alec Litowitz and Ross Laser’s Magnetar Capital cut the biggest position of the 700 funds monitored by Insider Monkey, worth close to $0.4 million in call options. Ken Griffin’s fund, Citadel Investment Group, also sold off its call options, about $0.4 million worth. These moves are important to note, as total hedge fund interest was cut by 1 funds heading into Q3.

As you can see these stocks had an average of 14.5 hedge funds with bullish positions and the average amount invested in these stocks was $107 million. That figure was $56 million in PAHC’s case. La-Z-Boy Incorporated (NYSE:LZB) is the most popular stock in this table. On the other hand U.S. Physical Therapy, Inc. (NYSE:USPH) is the least popular one with only 11 bullish hedge fund positions. Compared to these stocks Phibro Animal Health Corp (NASDAQ:PAHC) is more popular among hedge funds. Our calculations showed that top 15 most popular stocks) among hedge funds returned 24.2% through April 22nd and outperformed the S&P 500 ETF (SPY) by more than 7 percentage points. Unfortunately PAHC wasn’t nearly as popular as these 15 stock and hedge funds that were betting on PAHC were disappointed as the stock returned 4.2% and underperformed the market. If you are interested in investing in large cap stocks with huge upside potential, you should check out the top 15 most popular stocks) among hedge funds as 13 of these stocks already outperformed the market this year.