Our extensive research has shown that imitating the smart money can generate significant returns for retail investors, which is why we track nearly 750 active prominent money managers and analyze their quarterly 13F filings. The stocks that are heavily bought by hedge funds historically outperformed the market, though there is no shortage of high profile failures like hedge funds’ recent losses in Facebook. Let’s take a closer look at what the funds we track think about PetIQ, Inc. (NASDAQ:PETQ) in this article.

PetIQ, Inc. (NASDAQ:PETQ) has experienced a decrease in support from the world’s most elite money managers in recent months. Our calculations also showed that PETQ isn’t among the 30 most popular stocks among hedge funds.

How have hedgies been trading PetIQ, Inc. (NASDAQ:PETQ)? 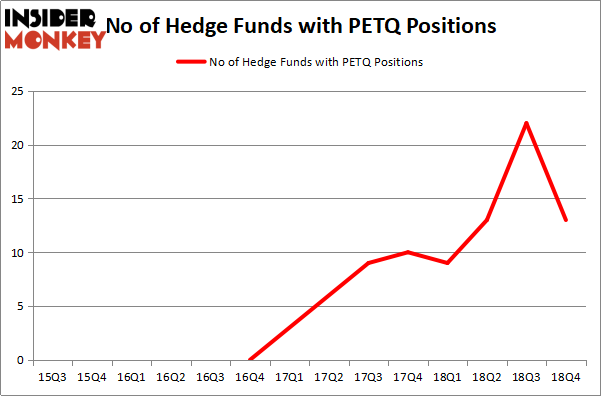 According to Insider Monkey’s hedge fund database, D. E. Shaw’s D E Shaw has the biggest position in PetIQ, Inc. (NASDAQ:PETQ), worth close to $15.1 million, accounting for less than 0.1%% of its total 13F portfolio. The second largest stake is held by Buckingham Capital Management, managed by David Keidan, which holds a $10.9 million position; 1.6% of its 13F portfolio is allocated to the company. Other hedge funds and institutional investors that are bullish include Richard Driehaus’s Driehaus Capital, Jim Simons’s Renaissance Technologies and Jay Genzer’s Thames Capital Management.

Judging by the fact that PetIQ, Inc. (NASDAQ:PETQ) has experienced a decline in interest from hedge fund managers, it’s safe to say that there was a specific group of fund managers who sold off their full holdings by the end of the third quarter. Interestingly, Noah Levy and Eugene Dozortsev’s Newtyn Management cut the largest investment of the “upper crust” of funds watched by Insider Monkey, totaling about $5.9 million in stock, and Glenn Russell Dubin’s Highbridge Capital Management was right behind this move, as the fund said goodbye to about $3.6 million worth. These transactions are interesting, as aggregate hedge fund interest fell by 9 funds by the end of the third quarter.

As you can see these stocks had an average of 8.5 hedge funds with bullish positions and the average amount invested in these stocks was $28 million. That figure was $54 million in PETQ’s case. Kornit Digital Ltd. (NASDAQ:KRNT) is the most popular stock in this table. On the other hand TransMontaigne Partners L.P. (NYSE:TLP) is the least popular one with only 4 bullish hedge fund positions. PetIQ, Inc. (NASDAQ:PETQ) is not the most popular stock in this group but hedge fund interest is still above average. Our calculations showed that top 15 most popular stocks) among hedge funds returned 24.2% through April 22nd and outperformed the S&P 500 ETF (SPY) by more than 7 percentage points. Hedge funds were also right about betting on PETQ as the stock returned 28.7% and outperformed the market by an even larger margin. Hedge funds were rewarded for their relative bullishness.