Is Perficient, Inc. (NASDAQ:PRFT) a good bet right now? We like to analyze hedge fund sentiment before doing days of in-depth research. We do so because hedge funds and other elite investors have numerous Ivy League graduates, expert network advisers, and supply chain tipsters working or consulting for them. There is not a shortage of news stories covering failed hedge fund investments and it is a fact that hedge funds’ picks don’t beat the market 100% of the time, but their consensus picks have historically done very well and have outperformed the market after adjusting for risk.

Is Perficient, Inc. (NASDAQ:PRFT) a cheap investment right now? Money managers are in a pessimistic mood. The number of long hedge fund positions dropped by 5 recently. Our calculations also showed that PRFT isn’t among the 30 most popular stocks among hedge funds. PRFT was in 14 hedge funds’ portfolios at the end of December. There were 19 hedge funds in our database with PRFT positions at the end of the previous quarter.

If you’d ask most stock holders, hedge funds are seen as slow, old financial tools of the past. While there are more than 8000 funds in operation today, Our experts choose to focus on the elite of this group, around 750 funds. Most estimates calculate that this group of people administer most of all hedge funds’ total capital, and by monitoring their first-class picks, Insider Monkey has uncovered a few investment strategies that have historically outpaced Mr. Market. Insider Monkey’s flagship hedge fund strategy surpassed the S&P 500 index by nearly 5 percentage points a year since its inception in May 2014 through early November 2018. We were able to generate large returns even by identifying short candidates. Our portfolio of short stocks lost 27.5% since February 2017 (through March 12th) even though the market was up nearly 25% during the same period. We just shared a list of 6 short targets in our latest quarterly update and they are already down an average of 6% in less than a month.

What does the smart money think about Perficient, Inc. (NASDAQ:PRFT)?

At Q4’s end, a total of 14 of the hedge funds tracked by Insider Monkey were bullish on this stock, a change of -26% from one quarter earlier. By comparison, 10 hedge funds held shares or bullish call options in PRFT a year ago. With hedgies’ capital changing hands, there exists an “upper tier” of notable hedge fund managers who were adding to their stakes meaningfully (or already accumulated large positions). 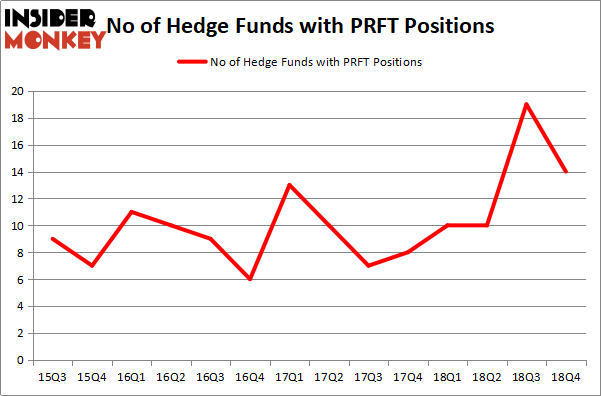 More specifically, Citadel Investment Group was the largest shareholder of Perficient, Inc. (NASDAQ:PRFT), with a stake worth $3.9 million reported as of the end of December. Trailing Citadel Investment Group was AQR Capital Management, which amassed a stake valued at $3.7 million. GLG Partners, D E Shaw, and Two Sigma Advisors were also very fond of the stock, giving the stock large weights in their portfolios.

Due to the fact that Perficient, Inc. (NASDAQ:PRFT) has experienced falling interest from the aggregate hedge fund industry, logic holds that there is a sect of funds who were dropping their full holdings last quarter. It’s worth mentioning that Glenn Russell Dubin’s Highbridge Capital Management dumped the largest investment of the 700 funds monitored by Insider Monkey, totaling close to $3 million in stock, and Chuck Royce’s Royce & Associates was right behind this move, as the fund said goodbye to about $2.2 million worth. These bearish behaviors are interesting, as total hedge fund interest dropped by 5 funds last quarter.

As you can see these stocks had an average of 10.25 hedge funds with bullish positions and the average amount invested in these stocks was $40 million. That figure was $22 million in PRFT’s case. Meridian Bioscience, Inc. (NASDAQ:VIVO) is the most popular stock in this table. On the other hand Summit Midstream Partners LP (NYSE:SMLP) is the least popular one with only 3 bullish hedge fund positions. Perficient, Inc. (NASDAQ:PRFT) is not the most popular stock in this group but hedge fund interest is still above average. Our calculations showed that top 15 most popular stocks) among hedge funds returned 24.2% through April 22nd and outperformed the S&P 500 ETF (SPY) by more than 7 percentage points. Hedge funds were also right about betting on PRFT as the stock returned 27.9% and outperformed the market by an even larger margin. Hedge funds were rewarded for their relative bullishness.